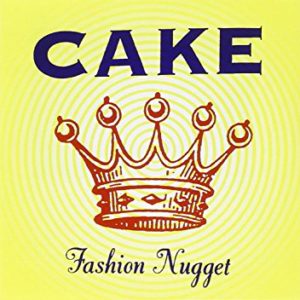 Finding a niche in the music business and sticking to it is usually the best path to success. Music fans tend to hear a song they like and expect similar tracks from your band in the future. Personally, I love experimentation that leads to eclectic sounding albums. Today’s band might be as diverse as they come, with each album sounding like a whole new animal.

John McCrea was a Sacramento, California native who had moved to Los Angeles in 1991 looking to start a band. When that quickly fell apart, he moved back to Sacramento trying to avoid the “Sacramento coffeehouse circuit”—playing acoustic sets in front of five people at local Starbucks. He’d find a trumpeter, guitarist, bassist and drummer who were all active in the local music scene with a same desire for direction. They landed on the band name Cake—not referring to the delicacy, but rather, “something that cakes onto your shoe and is just sort of there until you get rid of it.” Couldn’t have written that better myself.

After some local steam, they independently released their debut album, selling copies out of their van to cover touring expenses. The release reeled in some acclaim, being named one of the best indie releases of 1994 by Pulse! magazine. The buzz combined with a concert at the Great American Music Hall in San Francisco would lead to a record deal with Capricorn Records, paving the way for Cake to begin their commercial career.

Their second album, Fashion Nugget was released in September of 1996. It was again self-produced, but the band’s goal was to make it feel more professional, yet still “raw” in terms of overall sound and vibe. The album was critically positive, offering a similar feel to their debut. Focusing more on a humorous, genre-free, creative instrumental record, it was so different than anything else in the grunge scene at the time—event though they don’t really fit that label. Because of the time, Cake was lumped in with alt rock and grunge, but really were never truly a part of that scene.

On the strength of the single “The Distance,” the album was certified gold by Christmas of that year. It was marked platinum in the U.S. by April of 1997 and the success seemed to be coming fast and furious. Touring followed, playing huge cities like Chicago, Los Angeles and San Antonio—even an overseas tour in the U.K. and Japan. In what seemed to be a prelude to becoming a household name, McCrea fell ill with extreme exhaustion, and there was a bit of a hiatus.

This is one of those bands, where you don’t think you know much by them, but you hear all the hits, and realize how solid they’ve been for two decades. With this album also carrying their cover of Gloria Gaynor’s “I Will Survive”, Fashion Nugget truly put them on the map. Now, given their next album was after two personnel departures and McCrea’s illness, it was a very different sound than this—but that’s what makes the band so much fun. It’s sort of like listening to Barenaked Ladies or something, where you love the jam band feel, but a couple of the tracks are so legit, they’ve been mainstream radio singles for 20 years. They would find single success on the charts a few more times, but the sales of Fashion Nugget would never again quite be duplicated. In spite of the quirks and the perhaps monotone vocal, their music never gets old for me, and that’s a big win for any band.

Cake is still out there touring from time to time, and can be found in the media. They haven’t released an album since 2011, but McCrea keeps stringing fans along saying a new one is coming. In the meantime, for under $5 bucks today, don’t distance yourself from this record—it’s a real toe-tapper.