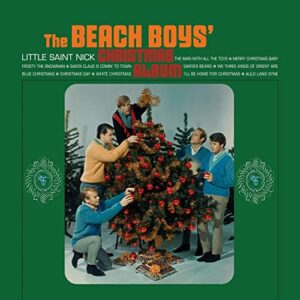 There’s certainly no shortage of holiday albums out there to listen to. Generally speaking, you can pick your favorite artist and it’s likely they have at least a dozen tunes out there covering Santa and winter. Today’s featured group is one of the icons in history, with an immensely popular holiday album to boot.

The Beach Boys got their start in the late ‘50s and early ‘60s, but began to rise to new heights in the mid ‘60s. It seems for a while like they could do no wrong, and all their singles and albums had the Midas touch. Surf music was an era during that time that couldn’t be stopped, and many argue the Beach Boys were the main reason why that style of music was so huge. The luster started to fade just a bit, when something known as the British Invasion swept the music scene off its collective feet in 1964. It so happened they shared the same label as the unquestionable leader of that movement, The Beatles. So naturally, the attention and support quickly became very lopsided in favor of the flavor of the week.

In response, Brian Wilson knew he needed to keep pace, and thought it could be a good idea to change up the style. He wrote his last surf song in April of the same year, and in June, in response to being snubbed on Phil Spector’s popular holiday record, he decided to start recording one of his own. The Beach Boys’ Christmas Album hit shelves in November of ’64. It contained five original tracks and seven standards. The initial release was so hot, it shot all the way up to No. 6 on the Billboard 200 charts, eventually hitting the same gold status as virtually every other Beach Boys album in history.

What made this one a little different? They hired an arranger who complimented their iconic sound with a 41-piece orchestral backing. Shockingly, only one single was released for commercial radio—but they were helped by releasing the song “Little Saint Nick” the year prior, plus this album was the first time that single was made available for purchase (and it’s a song very commonly heard to this day).

At a time when perhaps the popularity was waning, no one had anything but total respect for Wilson and the band. The critical reviews of the album were filled with holiday cheer. Across the board they felt Wilson’s pop genius was perfectly suited for yuletide fare, and the group delivered on a lush performance on all twelve tracks. This album also marked the first time Wilson “went solo”, by belting out “Blue Christmas” by himself. It was a bit controversial, since some felt it was an audition of sorts for him to venture out on his own in the near future. It’s something Brian would in fact end up doing, but it would take another twenty plus years to complete.

Interestingly enough, band member Mike Love was given no writing credits on this album upon its release, and it would take until a 1994 court case in which Love would receive them on the first four tracks of the record. It’s easy to tell just based on that information alone how things went for the Beach Boys after their star faded.

Lawsuits and acrimony aside, I’m certain had the group just tossed on this holiday record they could have worked it all out over some nice, relaxing songs—ones sung in the surf style that not only shaped music history, but also put the Beach Boys in the same discussion as any other act to make it big in the biz. Christmas comes this time each year, and if you don’t remember just take it from Brian Wilson (and thirty years later Mike Love). Happy Tuesday!

TDS and NFL Network teaming up for a free preview
Half off SHOWTIME offer ends Dec. 31