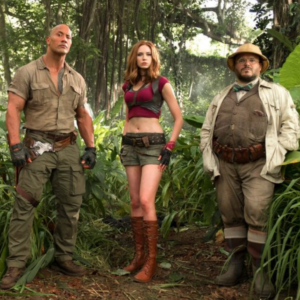 Blockbusters and award-winners coming to TDS TV on Demand

This month, TDS TV on Demand has some of the biggest and best films of 2017. We can start with the blockbusters “Jumanji: Welcome to the Jungle” and “Star Wars: The Last Jedi.” The two films combined to take in more than $1 billion at the box office. If you’re interested in critically acclaimed films, go no further than “The Shape of Water,” which last month snagged the Academy Award for Best Picture. And if that isn’t enough, you can check out the musical-comedy “Pitch Perfect 3” and the drama “The Last Movie Star.”

Welcome to fun in the jungle with “Jumanji.” The story is simple—four teenagers get sucked into a magical video game. The only way to escape is by working together to finish the game. The fun starts with the cast (Dwayne Johnson, Jack Black, Karen Gillan and Kevin Hart) who have a blast playing teenagers stuck in their new bodies. After that it’s a roller coaster ride of stunts, gags and adventure. “Jumanji: Welcome to the Jungle” may not be high art – but it’s a great ride.

Set at a secret facility during the Cold War, “The Shape of Water” surrounds the relationship that a mute cleaning lady develops with an amphibious creature that has been captured by the government. If that sounds a bit weird—well, you’d be right. It’s original and beautiful and strange and magical all at the same time. “The Shape of Water” is an adult “Beauty and the Beast” fairy tale—but the mature nature of the material means that it’s not for everyone. The film recently captured four Academy Awards including Best Picture and Best Director (Guillermo del Toro).

If you’re a fan of the “Pitch Perfect” films you’ll want to check out this latest entry into the series. This time around the Bellas reunite for one last singing competition at a USO tour. The movie doesn’t add anything new to the previous films, but the engaging cast (Anna Kendrick, Rebel Wilson, Hailee Steinfeld, Brittany Snow, Anna Camp) and the themes of family and friendship are worth your time.

The latest “Star Wars” installment offers an engaging mix of scintillating action, effects and storytelling—especially when it focuses on Luke Skywalker and Rey—as well as the latter’s uneasy connection to the evil Kylo Ren. The film misfires a bit during a side trip to a casino planet, and there are too many unnecessary comic and cute moments that disrupt the story’s narrative, but “Star Wars” fans will love the epic battles and thrills and heartbreaks that we’ve come to expect. The film features one of the best lightsaber fights in the franchise’s history.

Touching, poignant film about an aging movie star (Burt Reynolds) who is forced to face the fact that his glory days are behind him. While a bit sappy, “The Last Movie Star” is really a tribute to Reynolds—who displays a weary but dignified approach toward his lot in life. Ariel Winter plays the young woman who bonds with Reynolds when she is is forced to chauffeur him around for the weekend in Nashville, where he is receiving a film award.

Jumanji: Welcome to the Jungle, Pitch Perfect 3, Star Wars: The Last Jedi, The Last Movie Star, The Shape of Water