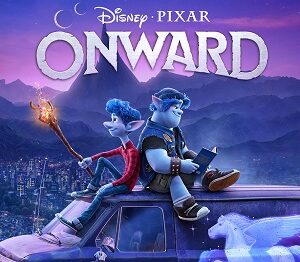 With all of us spending time at home, there’s never been a better time to watch some great new movies! Kick back and take a peek at everything you and your family can enjoy right from your couch:

Yes, this was just in the theaters, but coronavirus stole this movie’s thunder. Disney quickly pivoted and has released this heartwarming and funny Pixar movie to home audiences! Starring Tom Holland (of Spiderman fame) and Chris Pratt (Parks and Rec, and Jurassic World), as two teenage elf brothers who embark on a quest to spend one more day with their late father. With a whopping 95% audience score on Rotten Tomatoes, this is one all ages will enjoy.

Nominated (and arguably robbed of an award) for Best Picture, Little Women is an amazing new retelling of the classic tale. Certified Fresh with a 90%+ audience AND reviewer score, the cast is described as “stellar.” Saoirse Ronan, Emma Watson, Florence Pugh, Eliza Scanlen, and Laura Dern. Seriously, you should watch this intelligent, fresh, feel-good movie.

Action fans, here’s your next movie! Harley Quinn is back after her breakup with Joker—and brings along a few friends including Huntress and Black Canary. The movie is told from Harley’s perspective, has fantastic fight scenes, and an eye-popping visual style. This movie has surprisingly solid reviews (#certifiedfresh) and audiences loved it just as hard. Sit back and enjoy this colorful, energetic, and hard-hitting movie.

Another literary classic turned into a movie, this iteration of The Call of the Wild stars Harrison Ford as John Thorton. The real star of the film, however, is Buck—the dog who is uprooted and transplanted to the wilds of Alaska during the Gold Rush of the 1890s. It has adventure, it’s family friendly, and the underlying message about discovering what’s really important in life really hits home.

They’re back! This was supposed to be released in theaters but the coronavirus crisis resulted in a home release. Poppy and Branch discover there are actually six different troll tribes, each devoted to a different genre of music: funk, country, techno, classical, pop, and rock. Don’t go looking for a lot of depth, but it’s joyful, bright, and the music is catchy and fun. The perfect escape for the whole family!

Ben Affleck returns to dramatic, non-Batman roles in this well-received film. Affleck plays Jack Cunningham, former high school basketball phenom who is asked back to coach his struggling alma mater team. In life echoing art, Cunningham—not unlike Affleck—is battling alcoholism and other inner demons. One reviewer called Affleck’s performance the best of his career, and another calls it the driving force behind this cheer-worthy film.

Do we really need to say too much about this one? Martin Lawrence and Will Smith are BACK as Marcus and Mike. You’ve got action, you’ve got star power, and you’ve got charisma. It’s a fun return for this franchise you didn’t realize you missed.

Given all of the drama about getting the CGI right on Sonic, there was worry the movie wouldn’t deliver—but it really does. With a big 93% audience score, this game-inspired adventure is a charming and fun watch for the whole family. Jim Carey stands out as the movie’s villain, a role he plays at his silly best.