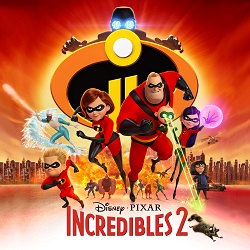 You’ll be thankful for all the great movies on TDS TV On Demand this month. You’ll find options perfect for kids ages 2-102 (Thanksgiving viewing, anyone?), plus find an action blockbuster, a thriller, a box-office winning romance, the latest drama from a two-time Oscar nominee, and much more. Grab your remote and get watching!

Let’s start with movies for the whole family…

The Parr family returns to the big screen—finally—along with Edna and Lucius. The story picks up where the last movie left off, only this time it’s Helen who’s away on an adventure while Bob handles the home front with the kids. It’s rare when a sequel manages to meet your expectations, but this one really does. Note: In this reviewer’s opinion, Jack-Jack’s scene with the backyard raccoon is worth the ticket price alone!

What happens if Christopher Robin grew up? This heartwarming live action movie tells the tale of a middle-age Christopher who has lost the magic of his youthful adventures with Pooh, Piglet, Tigger and the rest of the gang. Those friends come to the real world to help him rediscover his inner child and happiness. Described by reviewers as being like a warm, reassuring blanket, it’s just the ticket for kids and adults alike.

And next, some thrills!

If Halloween’s passing is making you pine for a monster movie, this is for you! The monster in this popcorn flick is a massive, thought-to-be-extinct prehistoric shark called a Megalodon. It’s attacked an undersea observation station and Jason Statham’s Jonas Taylor is the expert diver sent to rescue the crew. This action flick doesn’t break any new ground (or water), but that doesn’t mean it isn’t a fun ride.

Searching may be one of the best-rated 2018 movies you’ve never heard of—it’s earned a 93% Certified Fresh score on Rotten Tomatoes and an 89% Audience score. It’s a modern thriller about a father (John Cho), searching for his missing 16-year-old daughter. Called a “well-crafted mystery with quite a few unexpected twists and turns” by one reviewer, the movie has an unexpected emotional punch and great performances.

Spike Lee, a two-time Oscar nominee, tells the tale of an African American police officer who infiltrated the local Ku Klux Klan. Despite the seemingly serious subject matter it’s a comedy drama—and it’s also based on a true story. It’s a smart and biting commentary on current events and critics and moviegoers are saying it’s some of Mr. Lee’s best work.

And let’s not forget romance!

This all-star romantic comedy-drama, based on the best-selling novel of the same name, is a win with critics and audiences alike. The story follows what happens with a New York woman discovers her long-time boyfriend isn’t exactly what he seemed in the states. When they travel to his home country of Singapore for a wedding, she discovers he comes from one of the country’s wealthiest families and is considered the “Prince William of Asia.” The all-star cast makes this romantic comedy-drama work.