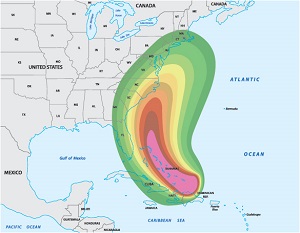 We like to believe technology is immune to things such as the weather (or the angle of the sun) … but that’s simply not the case. There are times when natural phenomenon interferes with radio and TV signals—and one of those is called tropospheric ducting.

The British Broadcasting Corporation (aka the BBC) has a great explanation:

When a television signal is broadcast from a transmitter, some of it disappears upwards into space and is lost. However, during certain weather conditions, the “lost” signal can become bent back towards earth and received much further away than normal. The lost signal can potentially travel great distances, up to many hundreds of miles. This is known as tropospheric ducting and can distort or prevent television reception.

Mother Nature is to blame for tropospheric ducting

Under normal weather conditions, there is a decrease in temperature as TV and radio as move up in the Earth’s atmosphere signals (a temperature inversion). When tropospheric ducting happens, the opposite is true. Signals move through an area where the temperature rises. In these areas the refractive index of the atmosphere is higher which bends the signals—in some cases, a lot. A normal, stable signal can get bent so they’re received even 500 miles away from where they should be.

When does this happen?

It happens pretty frequently in the spring and summer months, often when hot days are followed by cool nights. This is why the coastlines of the U.S. end up more frequently impacted by these weather conditions. Here is a map that shows the current areas impacted.

What does this mean for me?

Because signals can travel where they wouldn’t normally travel, it’s possible you could lose a signal. On your radio, it’s also possible you can receive a signal for a station that’s really far away.

What can you do to fix it?

Unfortunately nothing. We have to wait for the weather pattern to change so atmospheric conditions return to normal.

Call before you dig!
Get the Most out of Your TDS TV+ Experience