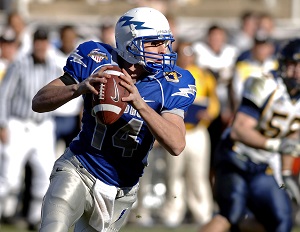 You’ll find all the football you want on TDS TV®

It’s fall (or close to) which means a few things—the kids head back to school, there’s a slight chill in the air, and … oh, FOOTBALL IS BACK!

If watching football on TV is on your agenda over the next few months, TDS TV® has you covered. No matter what channel package you subscribe to, you can catch the best from the gridiron.

Here’s a roundup of where to catch all the action:

NFL
Everyone can watch the NFL on CBS, FOX, and NBC. Games will also be broadcast on ESPN—including Monday Night Football—so be sure to tune in if you have the Expanded tier. Expanded Plus subscribers, you also have NFL Network which means you can watch Thursday night games (except on Thanksgiving), plus get the full hook-up and behind the scenes on your favorite teams (or rivals).

In addition to the regular season  games played in the states, four games will be played in London this season and one will happen in Mexico City. Here’s when to watch (or set your DVR):

If all the above isn’t enough to satisfy your appetite for pigskin, consider a subscription to TDS TV’s Sports Tier that includes RedZone! (in both SD and HD). You’ll see every touchdown in every game on every Sunday afternoon all season long…along with lots of other awesome channels, of course.

The 2017 NFL season kicks off on Sept. 7 on NBC with the defending Super Bowl champion New England Patriots hosting the Kansas City Chiefs. The season will conclude with Super Bowl LII on NBC on Feb. 4, 2018 at U.S. Bank Stadium in Minneapolis.

College
Just like NFL games, you can catch college ball on CBS, NBC, FOX and also ESPN. But there are also other options…

Fantasy Sports
If you’re into fantasy sports, I’ll take this opportunity to remind you that the Sports Tier also includes the Fantasy Sports Network (in HD, so you must have it as part of your service).

High School
And, last but not least, unlike some providers, TDS TV carries local channels in every community. We won’t list them here (there’s just too many!) but this means you should check your local listings for high school game broadcasts.

Seriously, you have so many options I’m not sure how you’re going to watch it all—but we wish you the best of luck.  Happy football season, everyone!