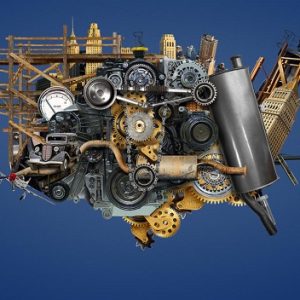 The fiery rise of industrial icons William Boeing, Walter Chrysler, J.P. Morgan Jr., and Pierre Du Pont will be featured on The History Channel starting on Monday, May 31, 9/8 CT.

“The Titans That Built America” is a three-night series that showcases the rich history of the rise of billion-dollar empires like the automobile industry, the building of skyscrapers, conquering human flight, and fueling the American victory in World War II. In this franchise spinoff of “That Built” series, experience how the four heavy hitters endure rivalries with one another and ultimately come together to defeat our country’s greatest enemy.

This series will air over three consecutive nights and answers questions such as: Why did Henry Ford expand his empire from the highways to the skyways? What ingenious solution kept the Hoover Dam from crumbling? And how did ruthless business rivals use innovation to set their differences aside—and take on the greatest threat the world has ever seen?

To see a preview of what’s to come, check out the trailer below:

Leonardo DiCaprio and Jennifer Davisson of Appian Way Productions are executive producers of “The Titans That Built America,” along with Stephen David, Tim Kelly and Joey Allen from Stephen David Entertainment.