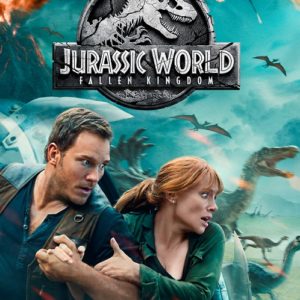 You want blockbusters and highly rated movies? You’ll find them on TDS TV on Demand. This month start with the scary Hereditary, then fall for the love story/drama Adrift, and enjoy fun blockbusters like Ocean’s 8, Jurassic World: Fallen Kingdom, plus the latest Star Wars prequel. We also have some lesser-known but highly rated films worth checking out.

Staring the always-great Toni Collette, this highly rated horror movie is the story of a family haunted by their secretive grandmother. The writer/director of the film describes it as “a tragedy that curdles into a nightmare.” Reviewers called it “genuinely horrific” with a “nerve-shredding finale”—and even “this generation’s Exorcist.” Not for the faint of heart, this is the real horror deal. If you like being scared, this is a must-see.

It’s a love story and a survival drama rolled into one. Based on true events, the movie centers on a couple’s chance meeting—and then what happens after they are caught sailing through the center of one of the strongest hurricanes ever reported. Star Shailene Woodley’s performance received rave reviews as Tami Oldham, a strong and capable woman who saves herself and her man.

If you liked the original Ocean’s 11, 12 and 13, you’ll likely enjoy this fresh take on the heist films. Staring Sandra Bullock as Debbie, Danny’s estranged sister, she and her team decide to pull off a heist to steal a $150 million Cartier necklace in only five weeks. There’s nothing really groundbreaking about this film, but that doesn’t mean it’s not fun to watch such a strong cast (Cate Blanchett, Anne Hathaway, Helena Bonham Carter, Mindy Kaling, and Rihanna) deliver the goods.

Set three years after the Jurassic World theme park was overrun by dinosaurs, Owen (Chris Pratt) and Claire (Bryce Dallas Howard) are back, but this time on a rescue mission. The dormant volcano is set to blow so they return to the island to save the remaining animals—but a conspiracy puts humans on the U.S mainland at risk. There’s an element of “what you see is what you get” with all of these Jurassic movies. If you can suspend your disbelief at the setup, you’ll likely enjoy this summer blockbuster.

Hyper-drive back in time for this Han Solo prequel. A younger Han (played by Alden Ehrenreich) meets Chewie (Joonas Suotamo) and also the always-suave Lando Calrissian (this time played by Donald Glover). Directed by Ron Howard after the original directors were fired over creative differences, opinions on this film are a bit split—but if you like the Star Wars universe, you should give it a try and see what you think.

We’ve talked about some of the big blockbusters coming to video on demand, but there are a few lesser-known movies you might also want to check out:

Damsel
Certified Fresh on Rotten Tomatoes and starring Robert Pattinson and Mia Wasikowska, this comedy western (yes, you read that right) premiered at Sundance. Check out the trailer.

The Seagull
If you’re up for a compelling family drama, this might be just your ticket. Based on the play, this movie premiered at the Tribeca Film Festival with reviewers commenting on all of the strong performances by the cast (which includes Annette Bening, Saoirse Ronan, Elisabeth Moss, and many more). Watch the trailer.