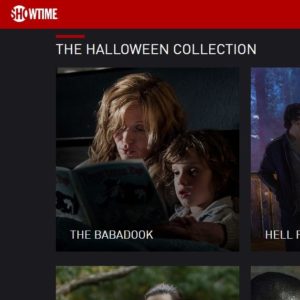 It’s the time of year where most everyone enjoys a bit of a scare and, thanks to SHOWTIME, there is an array of award-winning and critically acclaimed horror films you can watch right at home on your TV.

Even better, you don’t have to be freaked out about the price—you can add SHOWTIME to your TDS TV channel lineup for just $10.99 a month for a year! Give us a call to order (1-888-225-5837) and check out all of these great movies that have an 80% or higher rating on the Rotten Tomatoes’ Tomatomer

The Babadook (98%)
This movie relies on real horror rather than cheap jump scares—and boasts a heartfelt, genuinely moving story to boot.

Rosemary’s Baby (97%)
A truly disturbing tale of Satanism and pregnancy is famous movie for a reason. It was award winning at the time, and will still give you chills.

The Evil Dead (95%)
This is the original film that started the franchise—and for good reason. It’s campy, full of black humor, and basically irresistible.

Re-Animator (93%)
Perfectly mixing humor and horror, the only thing more effective than Re-Animator’s gory scares are its dry, deadpan jokes.

Death Line (91%)
This movie may be from the 1970s, but don’t dismiss it because of it’s age—it’s still championed by its core of fans (including Guillermo Del Toro). In the film, Patricia and her American boyfriend, Alex, find an important government official apparently unconscious on the stairs of a London Underground station. When the body disappears, the story takes an unexpected turn that is unsettling and surprising to say the least. (Watch for a cameo by I’veChristopher Lee!)

Dude Bro Party Massacre III (90%)
As you might guess from the title, this film is wickedly funny. A horror parody, one critic describes it as “destined to become a cult classic.” Brent enters the halls of the Delta Bi Theta fraternity to solve the mystery of his identical twin brother Brock’s murder, and he’ll do anything to crack the case, including an attempt at the frat’s most daring prank of all time.

Misery (90%)
This is the movie that put Kathy Bates on the map and won her a Best Actress Oscar for her performance as a reclusive and sinister woman (and James Caan’s performance was fantastic too). Critics consider it one of the best Steven King adaptations ever!

The Final Wish (88%)
If you liked Final Destination, you’ll probably like this since it’s done by the same creator. This is a psychological horror film about death, demons and granted wishes that are not the good fortune the protagonist thought they were.

They Live (86%)
A politically subversive blend of horror and sci fi, They Live is an underrated genre film from John Carpenter.

Zombie Honeymoon (82%)
An offbeat blend of horror, comedy, and romance where the newly-married Danny and Denise’s honeymoon takes a turn for the worse. A monster rises from the ocean and attacks Danny and soon the new husband is dead. But Danny isn’t gone for long — he unexpectedly regains consciousness, but Denise soon learns that her new mate has become a flesh-eating zombie.

Double Date (81%)
Meet innocent Jim, terrified of girls, and on a reluctant quest to prove his manhood the night before he turns 30. He and his cocky friend Alex think they’ve hit the jackpot when they meet the beautiful siblings Kitty and Lulu, who seem up for anything on a wild party-fueled night. But little do they know that these two want to make Jim lose much more than just his virginity.

God Told Me To (80%)
A New York detective investigates a series of murders committed by random New Yorkers who claim that “God told them to.”

These didn’t quite make the 80% cut but they’re still solid options: