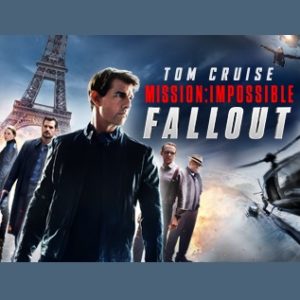 You don’t have to wait to open this present—the gift of great movies is already right at your fingertips! In December you’ll find some awesome options on TDS TV on Demand. Start with the latest Mission Impossible, and The Equalizer 2, and follow up with The Nun, Smallfoot, plus the latest comic book-inspired hit, Venom. Do yourself A Simple Favor and enjoy lots of movies this month!

Tom Cruise returns for the sixth time as Ethan Hunt along with his usual IMF co-stars. This time, Henry Cavill, Vanessa Kirby, and Angela Bassett come on board to track down a briefcase of missing plutonium. In a twist, the plutonium won’t be used to blow up anything—will be used to poison the water supplies of three countries. If you’ve seen the other MI films, you know what you’re going to get but the thing of it is, they do it so well! This installment received a 97% and Certified Fresh rating on Rotten Tomatoes for a reason. It’s a great, suspenseful, action movie.

Fans of The Conjuring universe won’t want to miss this latest entry to the supernatural horror series. This is a prequel of a sort, where the audience learns more about the source of the demonic nun featured in Conjuring Two. Set largely in 1952, the story tells the tale of a priest and a novice are sent to investigate the suicide of a young nun living in a cloistered abbey in Romania. A dark mystery unfolds surrounding the abbey’s history and an evil entity sealed within.

Denzel Washington returns as Robert McCall, serving justice for the exploited and oppressed—but this time it’s personal. McCall, now working as Lyft driver, steps in to investigate the death of a friend. It’s the first Equalizer sequel and, as always, Denzel’s performance was praised with reviewers saying he is at the “top of his game.”

Smallfoot has an all-star cast (Channing Tatum, James Corden, Zendaya, Common, LeBron James just to name a few) and is a fun, lighthearted movie perfect for the whole family. Humans have always thought Yetis were a myth—but what if Yetis also thought humans didn’t exist? The discovery of Smallfoot throws a Yeti community into an uproar as they begin to question what else might exist beyond their village. This movie is described as having “its heart in the right place” with “a surprisingly sophisticated allegory” (and a solid original score to boot!). Curl up with your little ones and you’ll all likely enjoy this warm tale.

The latest comics-inspired film stars Tom Hardy as Eddie Brock/Venom. Brock is an investigative journalist looking for redemption after a scandal, but becomes the accidental host of an alien that gives him a violent alter-ego. Unlike Jekyll and Hyde, Brock and alien create a hybrid with both beings sharing the same body. Together, Venom uses his new, rage-fueled, superhuman strength and power to stop a shadowy organization with their own plans for the aliens. Note: maybe don’t believe the critics on this one—it has an 85% Audience Score on Rotten Tomatoes, despite a low Tomatometer.

Considered a post-modern film noir, the story centers around Anna Kendrick’s Stephanie, a bloggers who seeks to uncover the truth about her best friend Emily’s (Blake Lively) disappearance. Filled with lots of unexpected twists and turns, this one will keep you on the edge of your seat with both the story and the excellent performances.

From the same team who brought you Ride Along and Think Like a Man, Night School stars Kevin Hart as Teddy, a down-on-his luck guy who returns to night school so he can get a job and keep his girlfriend. Tiffany Haddish plays the teacher trying to help Teddy and the other students pass and get their GEDs. Of course, since it’s a Kevin Hart comedy you know that things don’t exactly go smoothly for Teddy or the group of returning students—but we won’t spoil the fun by telling you everything.

We won’t go into detail on these, but also watch for:

Peppermint, avail. 12/11:  Jennifer Garner stars in this action thriller as a mom who transforms herself into a vigilante to get justice for her family.

The House with a Clock in its Walls, avail 12/18: Jack Black and Cate Blanchett start in a fantastical tale of witches, warlocks, and a magical house with a mysterious tick-tocking heart.

Check out all the movies now available on demand.