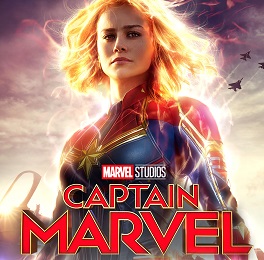 School is out and summer is here! Now’s the perfect time to relax and enjoy some hot movies—including some giant blockbusters you’ll want to watch (or see again!). Check out what you can enjoy at home this month:

Tyler Perry says goodbye to his popular and long-running movie franchise with this final Madea film (the 11th!). If you’re familiar with the rest of the movies, this one won’t be any real surprise. As usual, Perry plays multiple roles but this time drama unfolds while planning an unexpected funeral. If you’re a fan of these movies, you can’t miss this conclusion.

This Marvel blockbuster, set in the ‘90’s, tells the story of Carol Danvers and how she becomes Captain Marvel—one of the most powerful heroes in the universe. The kicker is that, at the start of the movie, Carol doesn’t know who she truly is. She believes she is Vers, a Kree, and a member of Starforce. Soon she’s caught in the middle of a galactic war while also on a path to discover her past. Samuel L. Jackson returns as a younger Nick Fury and Jude Law stars as Yon-Rogg, Davner’s Kree commanding officer. This is a must-watch for all Marvel Cinematic Universe fans!

Inspired by a true story, this dramatic romance follows the relationship of Stella and Will. These two teens are average teenagers in many ways, but both are cystic fibrosis patients. Their lives—and the healthcare routine needed to keep them both safe—are put into question as they fall in love. Like A Fault in Their Stars, this movie pulls lots of emotional heartstrings so grab some Kleenex and get watching.

From the director of Get Out, Jordan Peele’s second horror film is ambitious and terrifying. With a huge 94% Rotten Tomatoes critics score, this psychological thriller stars Lupita Nyong’o. It’s hard to talk about this movie without saying too much, but let’s just say the twists and turns will keep you guessing–and thinking long after the movie ends.

Cute family movie alert! Jennifer Gardner and Matthew Broderick co-star in this movie where imagination rules. A girl named June Baily’s imaginary amusement park, Wonderland, comes alive and she has to help save it with the help of the fun and lovable park characters.

This live-action version of the Disney classic is directed by the famous Tim Burton. The story departs somewhat from the original, this time including a wider cast of characters including the family who is charged to care for the newborn Dumbo. Dumbo’s flying ability helps save the circus and becomes such a huge draw he is sought after by another attraction—but a great offer doesn’t turn out to be as amazing as it first seemed.