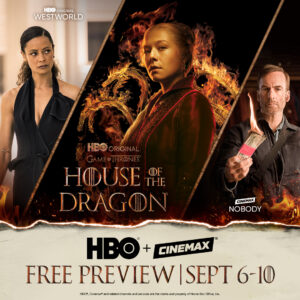 Looking for something new to watch? TDS TV® and TDS TV®+ customers are in luck! HBO/Cinemax are teaming up once again for a free preview, Sept. 6-10. Now’s the chance to rewatch your favorite classics or find a new show to binge.

Whenever or wherever you watch TV, HBO and Cinemax have something entertaining to offer. Read below for 10 top picks to watch during the preview:

The fun doesn’t have to stop there. When you subscribe with TDS, you’ll gain access to HBO Max and Cinemax Go. Download the app on your devices (including your TDS TV+ set-top box) and authenticate using your TDS credentials. Along with your channel lineup, this subscription allows you to stream all your favorite shows.

To keep watching at home or on the go, call or go online to order before the free preview ends. Give us a call 1-888-225-5837 to keep all of this great programming.

Check your channel guide for where you can view HBO and Cinemax.