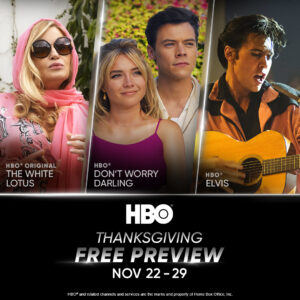 The White Lotus (HBO)
Set at the fictional White Lotus resort chain, this award-winning comedy-drama anthology documents the exploits and impulses of the employees and wealthy guests over the span of a week. Season 2, which stands on its own, just started so now’s the time to start watching!

SHAQ (HBO)
New series alert! Featuring a series of revealing interviews with O’Neal, SHAQ tells the story of a basketball legend unlike any other, whose larger-than-life personality transcended the sport and transformed him into a cultural icon.  The documentary series chronicles Shaq’s ascent to superstardom, as a dominant force who won four NBA championships, league MVP honors, and changed the game. It also encompasses his life off the court, from his upbringing in a military family to his deepest personal relationships and prosperous broadcasting and business careers. The series premiers Nov. 23.

We’re Here (HBO)
Join Bob the Drag Queen, Eureka O’Hara, and Shangela as they spread love and connection across small-town America through the art of Drag. The first episode of Season 3 airs Nov. 25.

Last Week Tonight with John Oliver (HBO)
John Oliver comes to HBO in this series that takes a topical look at the week in news, politics and current events. Each show offers Oliver a unique platform to offer his distinct perspective on issues facing the world today while also featuring a variety of special guests and segments.

The Vow (HBO)
This documentary series from Oscar-nominated, Emmy-winning directors Jehane Noujaim and Karim Amer (The Square, Control Room, The Vow) follows members who joined the self-improvement group NXIVM – whose leader was convicted of sex trafficking, racketeering conspiracy, and other crimes – to reveal the emotional toll of unfolding events on these individuals.

Avenue 5 (HBO)
Set 40 years in the future when traveling the solar system is big business, this series follows life on board Avenue 5—a mash-up of a cruise liner and a rocket ship. The Season 2 finale airs on Nov. 28.

His Dark Materials (HBO)
Based on Philip Pullman’s trilogy of the same name, this fantasy drama follows Lyra (Dafne Keen), an orphan living in a world governed by the religious and political body, the Magisterium. Lyra soon discovers she is the subject of a prophecy and destined to change the world.

Don’t Worry Darling (HBO)
Alice (Florence Pugh) and Jack (Harry Styles) are lucky to be living in an idealized community of Victory, but when cracks in their idyllic life begin to appear, Alice can’t help questioning exactly what they’re doing and why. Just how much is Alice willing to lose to expose what’s really going on in this paradise? An audacious, twisted, and visually stunning psychological thriller, Don’t Worry Darling reveals that things aren’t always as perfect as they seem.

DC League of Super-Pets (HBO)
Grab the kids to watch this one! Krypto the Super-Dog and Superman are inseparable best friends fighting crime in Metropolis side by side. When Superman and the rest of the Justice League are kidnapped, Krypto forms a team of superpowered shelter pets to help him rescue the Super Heroes.

Moonfall (HBO)
In this thrilling tale, a mysterious force knocks the moon from its orbit around Earth and sends it hurtling on a collision course with life as we know it. Starring Halle Berry, Patrick Wilson, John Bradley, Michael Peña, Charlie Plummer, Kelly Yu, and Donald Sutherland. Directed by Roland Emmerich; written by Roland Emmerich & Harald Kloser & Spenser Cohen.

Memento (Cinemax)
If you missed this the first time it’s well worth a watch. It holds a 94% Audience Score on Rotten Tomatoes (and is Certified Fresh). The movie follows a man with untreatable short-term memory loss attempting to track down his wife’s murderer. The complicating factor is that, although he can recall details of life before his accident, he cannot remember what happened fifteen minutes ago, where he’s going, or why. It’s directed by Christopher Nolan so there is so much more to the story. This will keep you guessing!

The Truman Show (Cinemax)
Another great movie that will keep you thinking long after it ends! Jim Carrey plays Truman Burbank who has no idea that his entire life has been broadcast on TV. His truth about his reality gradually unfolds and he has to decide whether to stay the TV star he has become, or act on what he learns.

Life of Pi (Cinemax)
One of the most gorgeous and interesting movies you’ll ever see. On its surface it tells the story of Pi and his journey in a lifeboat with a Bengal tiger, but there are many layers to this one that makes it well worth watching.

If you like what you see, call us at 1-888-225-5837 to keep all this great programming! You’ll get everything in your TDS TV and TDS TV+ guide, PLUS as a subscriber you’ll also get to stream everything on HBO Max and Cinemax Go.

Streaming Tunes Tuesday: Robert Randolph and the Family Band
How can I watch my show?

One Response to Catch the HBO & Cinemax free preview November 22-29!