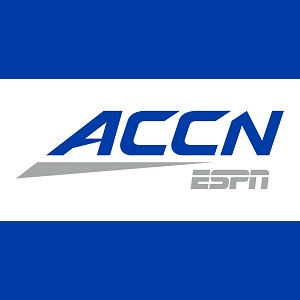 Calling all fans of the Atlantic Coast Conference! Watching your favorite conference just got easier! On August 22, the ACC is launching its very own, 24/7 sports network: ACC Network (ACCN).

Similar to the SEC Network, the ACC Network will provide round-the-clock coverage of your favorite teams and sports. Tune in to watch 40 football games, 150 men’s and women’s basketball match ups, and 250 Olympic events.

The network plans to give fans access to all things ACC all of the time. This means not only will you get sporting events, you’ll also see shows exclusive to ACCN. Some that have already announced include: a look at last year’s NCAAF title run by the Clemson Tigers, a documentary on legendary Florida State coach Bobby Bowden, and an all-access look at North Carolina’s men’s basketball team.

The ACC has also assembled top-notch analyst talent like Tim Hasselbeck, Katie George, EJ Manuel, and Mark Herzlich to break down the big games. With tailgating and football right around the corner, there could be no better time to watch the ACC Network.

How can you watch? For all TDS TV customers, ACC Network is joining the Expanded Plus Programming Tier starting the day it launches—August 22! You can find it on channel 628 in Standard Definition, and 1628 in High Definition.

In more good news, the ACC is also coming to TDS TV for Business in the following packages: Bar & Restaurant, Sports and More!

If you’re ready to spend your Saturdays watching some of the best games on TV, then you’ll want to read these five key takeaways for the upcoming ACC football season:

With seven starters on the offense returning, and a defense that set the tone last year, it’s hardly surprising that Clemson is heavily favored to win the ACC again in 2020. Trevor Lawrence was not perfect, but throwing for 3,280 yards, 30 touchdowns, and only four interceptions is pretty darn close. With Lawrence captaining the offense – barring an injury – the Tigers are sure to rip up opposing defenses this fall. However Clemson isn’t invincible, they have holes to replace in the defense, and only time and some seasoning will tell if they can return to full, 2018 form. The Sept. 7 game against Jimbo Fisher’s Aggies at Texas A&M may be Clemson’s biggest hurdle when it comes to pursuing another title.

Last year’s Florida State team struggled to score on multiple occasions due, in part, to an offensive line that had a hard time keeping defenses out of the backfield. With Deandre François now gone, it will be up to James Blackmon to man the helm if Wisconsin transfer, Alex Hornibrook doesn’t win the starting job from him. Regardless of who ends up under center, both players have enough talent and experience to help the Seminole offense get some points on the board. On the defensive side of the ball the good news is, there’s plenty of room for improvement; but the defensive line needs to be able to create some pressure. In the end, if the pieces come together, Florida State can begin its return to glory.

Quarterback is the word of the year for the Miami Hurricanes. If they can find the right one, they will be dangerous. But as of yet, it’s not clear if they’ve found that signal caller. Tate Martell, a transfer from Ohio State, is one possibility, but he hasn’t necessarily separated himself from QB incumbent, N’Kosi Perry or freshman, Jaren Williams. Outside of the quarterback position, Miami is in a good spot. They have the skills and athleticism that the Hurricanes are known for; it just has to come together under a new offensive coaching system.

In the ACC’s Atlantic Division, it’s hard to pick against the Tigers. But the team closest to dethroning Clemson is likely the Syracuse Orange. With quarterback Tommy DeVito on the rise, and a largely intact defense, the Orange are probably not on Clemson’s level, but they can certainly do some damage. With a game scheduled against Clemson on Sept. 14 in the Carrier Dome, look for Syracuse to come out with some fire against the defending champs.

The fact that Mack Brown is the oldest coach in a Power Five conference hasn’t phased Tarheel fans. After another wasted UNC season last year, Brown has returned to Chapel Hill, and returned to coaching. And although it’s been 22 years since Brown last coached at UNC, he and his staff look to bring a steady presence to a young and talented core of players. The Tarheels may not make a bowl game this year, but they should improve mightly.

Cheap Tunes Tuesday: Led Zeppelin
Beyond 9-1-1: what other N11 codes you should know