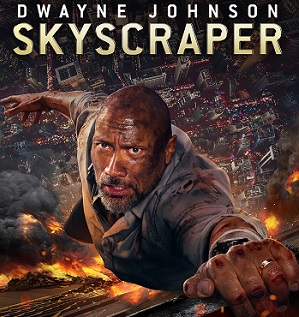 It may be cooling off outside, but the movies on TDS TV On Demand are hotter than ever! From the First Purge and Three Identical Strangers, to Hotel Transylvania 3 and Eighth Grade—and did we mention Skyscaper, Ant-Man and the Wasp, Mamma Mia: Here We Go Again, and The Spy Who Dumped Me? It’s a great mix of movies perfect for watching from the comfort of your couch.

It all started with a theory. Could allowing people to vent their aggression for one night, reduce crime for an entire year? The Purge started with the first experiment in a small, isolated community. One reviewer called it “surprisingly powerful and hard to watch” and another said it has “moments that resonate with real life.”

This documentary is already on best of 2018 lists. It’s story of three strangers—really identical triplets—who were reunited by astonishing coincidence. Their reunion sets in motion a series of events that unearth an unimagined secret. It won at Sundance and the story had so many jaws dropping, the movie was talked about on CNN, Newsweek, The Atlantic and many more. You’ve got to see it to believe this at once heartbreaking and heart-warming tale.

The perfect movie for the entire family this Halloween season—silly and funny, but with Dracula, Frankenstein, Blobby, and all the other monsters we’ve come to love. This time, the gang heads out on a summer vacation cruise where Drac, to Mavis’ dismay, falls in love with the mysterious ship captain. It’s nothing ground breaking, but if you or your little ones enjoyed the first two movies, this is just the ticket.

Skyscraper is a suspenseful action thriller that Rolling Stone calls “a disaster movie-meets-‘Die Hard.’” If that doesn’t sell you, how about this: it stars Dwayne “The Rock” Johnson. He’s a former FBI hostage rescue team leader who is framed for burning the tallest, safest building in the world. He has to clear his name plus rescue his family trapped inside. This movie is a clear addition to the “disaster film” list, but if you like the genre and/or can’t resist The Rock’s charm, this one’s for you.

This indie movie took the world by storm, winning three different awards at film festivals (including Audience Favorite at Sundance). Directed and written by famous YouTuber Bo Burnam, this movie follows the life and struggles of eighth grader Kayla Day (Elsie Fisher. It’s her final week of a disastrous final middle school year. Filled with keen observations and resonated with audiences for its realness.

Odds are, you don’t need to hear much about this movie because it was one of summer’s huge blockbusters. Did you like the first? Do you like the Marvel Cinematic Universe? If you said “yes” to either, odds are, you’ll enjoy this one. (Tip: Stay for the after credit scene! It fits right in with the end of Avengers: Infinity War and it shouldn’t be missed.)

The name of the movie almost says it all—“almost” because it’s not entirely a sequel. Here We Go Again is part sequel and part prequel to the first movie. Set 10 years after the first, it features flashbacks to 1979 to tell the story of Donna’s arrival on her Greek island and her meetings with Sophie’s three possible fathers. The music and the fun are back and, added bonus Cher also makes an appearance.

Mila Kunis and Kate McKinnon are two best friends who get sucked into the world of international espionage after one of them discovers her ex-boyfriend was a CIA agent. They end up on the run through Europe, trying to escape assassins while saving the world. Comedy plus action? It’s a great combination, particularly with McKinnon’s performance receiving rave reviews.