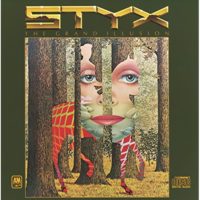 By Austin Krueger on January 17, 2017 in Online Life
Living in the Midwest, when someone mentions a trip to Chicago, it conjures up thoughts of deep dish pizza, outstanding hot dogs, major sports rivalries, and entirely too much traffic. Rarely do most associate specific bands with the Windy City (with the exception of the Blues Brothers), since arguably the biggest act to come out of Illinois is a solo artist by the name of Kanye West. Today’s band maybe isn’t up there with the greatest acts of all time for many, but perhaps they should be.
Read full story

By Austin Krueger on September 22, 2015 in Online Life
Gnarls Barclay's debut album was recorded over the course of 2005 and was released in April of 2006. St. Elsewhere almost immediately received universal acclaim and intrigue. Backed by the immense popularity of the single ‘Crazy’, the album sold over a million copies in the first year alone. If you listen you'll realize it goes from gospel to alt rock to soul to R&B. It’s absolutely unique, but incredibly well done—and worth your $5 today.
Read full story

By Austin Krueger on June 23, 2015 in Online Life
This is a slam-dunk album at $5 bucks. There are at least four major singles I can guarantee you’ll sing along with today, even if you were born 20 years ago. This type of music defined a decade, and Bon Jovi was at the forefront of that.
Read full story

By Austin Krueger on June 9, 2015 in Online Life
What if I told you there was a band that formed in 1988, but you never heard of them until two decades later? I’m guessing the biggest music fans out there would argue that’s impossible. And maybe for the die-hards out there, you won’t be as surprised by today’s band. But twenty years of not much recognition, followed by ten years of lots of albums sales and various hiatuses, they’re now one of the most recognizable names in pop music.
Read full story