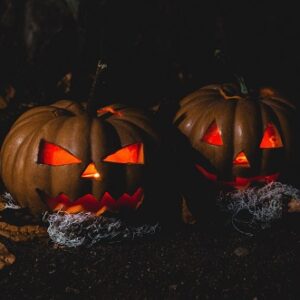 Where to watch your Halloween favorites

Boo! It’s the season when many of us are looking for chills and thrills—and, in good news, you can find them right in your TDS TV channel lineup. From classic scary movies and family friendly favorites, to festive food shows and spine-tingling new offerings, there’s lots to watch this month…if you dare.

Freeform
Freeform is hosting their annual 31 Night of Halloween event. It kicks off October 1 with Hocus Pocus, with loads of family friendly favorites in the weeks to come including: The Nightmare Before Christmas, Addams Family, Hotel Transylvania, Twitches, Scream, Ghostbusters, Sleepy Hollow, and lots more! Check out the full schedule.

TCM
Turner Classic Movies is hosting Fright Favorites every Friday in October, but all month long they’re featuring some of classic cinema’s eeriest and creepiest films that set the stage for the entire modern horror movie genre.

Watch the original 1931 Dracula, staring Bela Lugosi, and Cat People (1942), still on many “best of” lists for scary movies. Or how about the original House on Haunted Hill from 1959, or the cult-classic Night of the Living Dead from 1968.

What’s particularly special about the TCM movies, is that many are tough to find anywhere else so check out this helpful list of what’s coming so you can set your DVR.

SyFy Network
Offering ‘spooktacular” programming in October, the SyFy network just released their lineup of Halloween offerings, kicking off with the TV world premiere of The Strangers Prey at Night—but it doesn’t stop there.

And they’re also premiering Tales From the Hood 3 on October 17, and showing all of the Back to the Future movies this month (they say, “nothing’s creepier than your own mother hitting on you”), so be sure to check your guide for the latest!

Travel Channel
Sometimes, nothing is scarier than ghost encounters in real life. Ghostober on the Travel Channel features all things paranormal at haunted locations around the world. This year tune into watch Ghost Adventures: Horror at Joe Exotic Zoo, Amityville Horror House, The Exorcism of Roland Doe, The Osbournes: Night of Terror, Ghost Nation: Reunion in Hell, and so many more, including a favorite of this author, Destination Fear.

The Food Network
Kick off this year’s Halloween festivities with spooky sweets and treats courtesy of Food Network. They have a full lineup of new Halloween shows to inspire and wow you. Be sure to try:

Plus, let’s not forget probably the network’s scariest show—Worst Cooks in America.

AMC
It’s Fear Fest time and in October AMC will be showing a whopping 91 movies, plus the premiere of the new original series The Walking Dead: World Beyond and the return of Fear the Walking Dead.

With all those movies we’re not going to list them all here, but they’ve got it all from nearly A to Z. They’re showing An American Haunting and Amityville Horror, through Children of the Corn, Chucky, Final Destination, Friday the 13th, Ghost Ship, Halloween, Hellraiser, Pet Sematary, Sleepwalkers, Tremors, to Village of the Damned and Wes Craven’s Dracula and Wes Craven’s They—and pretty much everything in between.

Keep a close eye on your guide and plan ahead by taking a peek at the full list!

Premium Channels
We would be remiss if we didn’t mention all the great options airing on HBO, Cinemax, Showtime, and Starz. Of course, there soooooo many, we can’t talk about them all—but here are a few highlights:

If any of these channels aren’t part of your current channel package, there’s never been a better excuse for an upgrade—just give us a call!