If you have a Yahoo account, I have some bad news
Assuming of course, you agree that having the biggest data breach of all time is a problem. Yesterday Yahoo announced that at least 500 MILLION user account credentials were stolen. Not payment information (thankfully), but pretty much everything else. Names, birthdates, addresses, telephone numbers, passwords, security questions and answers, and email addresses were all taken—in 2014. Yes, two years ago. Yahoo says that if you have an account: change your passwords if you haven’t in the last two years, make sure there hasn’t been any suspicious activity, and don’t click on links/download attachments from unsolicited emails.

Government steps in front of self-driving cars
Figuratively speaking, of course. This week the feds issued their first rules of the road for self-driving cars, which probably isn’t an entirely bad thing. There are lots of companies with self-driving cars in the works (with some highly autonomous ones already on the market), so it makes sense that some guidelines be set. These are not laws…at least not yet, but this move is seen as setting the stage for some probably in the near future.

It’s never been easier to be a tourist
Thanks to Google’s new Trips app. The app, now available free for both Android and iOS, “will organize your plane tickets and hotel reservations, offer editorial guides to more than 200 cities, and make personalized recommendations based on your Google history,” according to The Verge. Note the words “personalized recommendations”—translation, maybe not for you if you have privacy concerns. If you don’t, it looks worth checking out.

New Google hardware coming October 4
Or at least that’s everyone’s guess based on the invite they sent this week. Stay tuned for more info after! 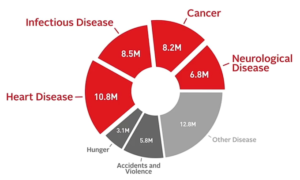 Zuck and Chan plan to wipe out diseases
Facebook power couple, Mark Zuckerberg and Pricilla Chan made the announcement this week. Even better, in addition to a plan they’ve also got money—$3 billion over 10 years to help prevent, cure, or manage all diseases (so yeah, kind of a broad mission!). It’s part of the couple’s philanthropic goals with the funds coming from the organization they created last year to do good things. The graphic shows the core health problems they want to tackle and the research will happen at Biohub—a physical location where researchers can work near in California.

Amazon takes on Shutterly
Without any fanfare or a publicity blitz, Amazon launched Amazon Prints this week. Competing against the Shutterflies of the world, the new site offers photo prints, stationary and photo books (at what the press is saying are “significantly cheaper” prices. For now, anyway, you have to be an Amazon Drive or Prime customer to use the new services.

Cheap Tunes Tuesday: The Fray
Your TDS TV User Interface Is Getting An Upgrade