Tech giants form environmental super group
A veritable who’s who of tech companies have joined forces to create the Breakthrough Energy Coalition. The organization will invest in zero-carbon energy technologies and is being backed by Bill Gates (Microsoft), Jeff Bezos (Amazon), Mark Zuckerberg (Facebook), Jack Ma (Alibaba) and many more (GeekWire has a full list). The goal of the group is to “accelerate progress on clean energy”…and make some money while doing it. Here’s hoping they’re successful!

Oil spill tech: the super sponge!
Engadget reported this week that Deakin University in Australia claims to have invented something that could revolutionize oil spill cleanups—a giant sponge. Not the cellulose kind you’ve got by your sink. A boron nitrate powder-based one, that will only soak up the oil and not the water. They’re apparently shopping the idea around to companies in hopes of producing it on a large scale, so there’s a chance it could be helping the environment in the near future.

Google rolls out Pinterest-like image feature
If you use Google’s image search, you can now save images and create collections to reference later. The feature eliminates the need for screenshots or saving webpages that hold the photos you were looking for. Saving photos only works on mobile, but all you need to do is tap the star on the image to save it. Once you have a few, Google says, you can organize them in folders. The feature is available now for both Android and iOS Google browsers.

Facebook co-founder and wife pledge to give away most of
their wealth
Well, most of them, anyway. This week Mark Zuckerberg announced the creation of the Chan Zuckerberg Initative. The mission of the LLC will be to focus on, “personalized learning, curing disease, connecting people and building strong communities.” LLC is designed so Zuckerberg and his wife can slowly give away 99% of their shares in Facebook and do good. But, they were met with quick criticism about the decision to make the organization a company rather than a charity. He responded to those yesterday, but basically, they’re giving up the tax benefits but can now lobby and advocate in ways a foundation cannot.

Kickstarter of the week: G-Ro
The G-Ro appears to be travel tech at its finest. With so many of us avoiding checking bags, the Shagli Design Studio reimagined the carry on with giant, all-terrain wheels, lots of space, tech-powering options, and more. There are nine days left to go on the project, and it’s already the most-funded piece of luggage ever on Kickstarter so it’s clearly hitting a chord. For $279 you can still score one—given the expected retail price of $499, it’s a good deal.

Star Wars gift alert
Sure, Think Geek always has an amazing array of Star Wars items—and they’re often amazing (seriously, you KNOW someone who needs these), but for something a bit more off the beaten path, check out this awesome poster. Scott Park has illustrated the original Star Wars trilogy spaceships and vehicles (including the animals!) in order. The result is pretty darn awesome. He has prints from other movies too, so considering shopping local…virtually. 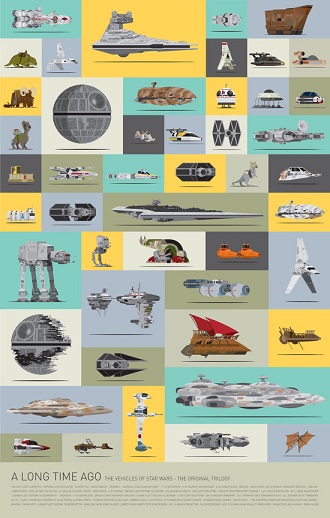