Giant robots battle it out
No, it wasn’t Pacific Rim 2 (although did you see that trailer?), it was a Giant Robot Duel. Livestreamed on Twitch, Team USA beat Japan, in what was described as a “slow, brilliant mess.” I didn’t catch it, but the inventors want this to be the start of a new MegaBot battle league. (Image: MegaBots)

Let Facebook pay your friends
Well, more accurately, you can pay your friends using PayPal that’s now part of Facebook Messenger, that is. This news just broke this morning, along with the announcement of a cat bot to help handle any questions you may have. Press on the green Payments button and you can select PayPal as the source. 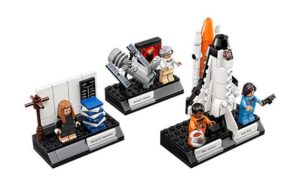 Women of NASA get their own Lego
Get your credit cards ready! If you managed to resist the new $800 Millennium Falcon, perhaps you can justify the much more affordable and equally exciting new Women of NASA set. It includes Nancy Grace Roman, Margeret Hamilton, Sally Ride, and Mae Jamison along with a space shuttle and, the Hubble telescope for good measure. It goes on sale on November 1 and is only $25—score!

Nearly a Star Trek universal translator
Check out this Kickstarter for a real-time earphone translator. The idea is that each person takes one of the earphones out of a special two-part charging case. As long as one of you has the corresponding app on their phone, you can have a natural conversation—even if you don’t speak the same language. As you talk, you’ll get a translation of what was said right into your ear. It looks like there’s a smidge of delay (so not quite real time), but STILL. I can see why this Kickstarter is blowing away its funding goals (maybe you need them too?).

#nerdfun Applying physics to superheroes
I don’t think it’s a stretch to say that you have to suspend a certain amount of disbelief when you watch superhero movies—but I have to admit, Rhett Allain at Wired has a good question. How on Earth does Aquaman fly in the Justice League trailer? If you want to nerd out on a short physics question, check it out.

Here’s the weirdest new tech you’ll see this week
Another Kickstarter, but I can’t help but talk about it because it’s basically a headless cat pillow. Yes, you read that right. It’s a pillow with a tail that wags when you pet the pillow…but there’s no head. Seriously, how strange is that? It supposed to be a therapeutic robot, but clearly I’m not sure I agree. Am I alone here?