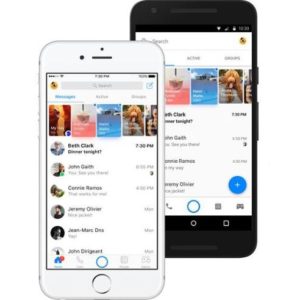 Warning: New Facebook Messenger look coming
The roll out of the updated navigation will happen this week. They’re relatively small and subtle tweaks, but they’re supposed to streamline your experience…at least a little bit (and make playing games easier). Rather than going into the details, I’ll let you head to TechCrunch for those, but thought I’d warn you it’s coming. Note: The Verge has instructions for using a completely less-bloated version of Messenger that’s available elsewhere in the world for Android users, if you’re interested.

Zelda’s coming to your pocket
According to reports, Nintendo plans to develop The Legend of Zelda for smartphones. It’s expected on the heels of Animal Crossing coming in 2018. Recently, Nintendo said they want to release two to three smartphone games in 2018, so maybe that’s not just empty talk. Not much more is known right know, so stay tuned.

Two BILLION people
That’s how many are using an Android device today, according to Google. It was one of many announcements made at their annual developer conference. Other takeaways: AI will be making its way into all of its products, Google Assistant will become more conversational (and is launching for iOS), a Google Home v2 is coming, and Google Photos will be getting some new features. TechCrunch has an easily-digestible slide deck with links for deep dives if you want to know more.

We’ll miss you, iPad Mini
The rumor swirling this week is that the iPad Mini will soon be discontinued (my son will be crushed!). Engadget thinks it could make sense, given the iPhone 7 Plus which is not too far off in size and because of the expansion of the larger sized iPad lineup. Time will tell!

The alarm clock every teenager needs
No, really. I’m seriously tempted to get one of these for my teen because it won’t let you snooze. It’s a new Kickstarter called the BedBud Alarm. Even if you get out of bed and get back in, the alarm will go back off—there’s no tricking it.

A lesson in money laundering
That’s how this story reads in Mashable about how the WannaCry hackers might be able to get to their ill-gotten gains. ICYMI: WannaCry was the ransomware that hit 150 countries and about 200,000 systems last week/early this week). The money paid is sitting in three, heavily watched Bitcoin accounts so the big question is how, exactly, the hackers will get it.

Amazon’s new bestseller list
It’s called Amazon Charts and it tracks the top 20 most sold and most read books of the week. The books, of course, had to have been sold through Amazon for them to know (and include Audible.com). As for the most-read books, it’s based on which titles have the highest average total readership on Kindle and Audible (not including reference materials, calendars, and religious texts). Kind of an interesting longer view of what’s hot on the website and an important tool for buyers and publishers.

If you liked Galaxy Quest…
An upcoming show on Fox may be just what you’ve been waiting for. Seth McFarlane stars (and John Favreau directs!). I got a kick out of the trailer, but there are very few space-themed shows I haven’t liked (with the exception of Voyager). Check it out:

If you like X-Men…
Fox also released a trailer for their upcoming series set in the X-Men universe. If you haven’t watched it yet, IMO, Friday is the perfect time :-).