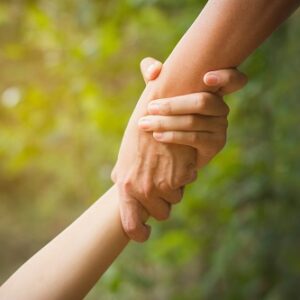 A TDS employee was recently the recipient of kindness and help from strangers that saved his life—but that’s not the only good Samaritan story we’ve had recently. Another TDS employee was able to offer assistance to someone in need at a time of crisis. Let both of these stories be a reminder that, even when times are tough or stressful, there are lots of good people around willing to help!

In the thick of this summer’s hot spell, on July 2, TDS technician Craig Hay arrived at Kurt Vogelsang’s home in Deforest to install TDS Fiber services. Approximately two-thirds of the way through the installation Craig started to feel somewhat ill, took a break and then continued on—something everyone has done when it’s hot and they need to cool down; however, this was different.

A short time later, Craig became more distressed and would find out later he had a major cardiac event and collapsed. Kurt immediately did what he could for Craig but recognized the severity of the situation and called his neighbor, Ross Anderson, and 911. Kurt knew that Ross has been trained in CPR so hoped he could help, and through a twist of fate he could. Ross and his family were supposed to be away on vacation that day but, due to travel issues, weren’t able to leave. Thankfully for Craig, Ross came to help immediately—his first real-life experience using his training outside of a classroom.

Ross performed CPR on Craig which restarted his breathing, also making sure other vitals were present until the paramedics arrived to take over. The local EMS were on the scene shortly thereafter, and they stabilized Craig before taking him to the hospital.

Since July 2, Craig has been on a journey to recovery—which included healing broken ribs due to Ross performing CPR correctly. On September 14, Craig returned to visit Kurt and Ross, but this time with gift baskets. They were gestures of thanks to both gentleman whose presence of mind and training were key to his survival.

We at TDS give our wholehearted thanks to these neighbors for helping to save a valued member of our team. Our gratitude also extends to the Deforest Police Department and the local paramedics who also played a key role in Craig’s rescue and recovery.

On Aug. 28, TDS received an unusual call. A gentleman named Mark was looking to identify a TDS employee who helped him and his friend after a bicycling accident. On the phone he explained they were riding their bikes in Monona, Wisconsin, around lunch time the last week of August when Mark’s friend took a big fall and broke his collar bone. A kind person named Tim, wearing a TDS logo shirt and driving a TDS vehicle, stopped to help. He and his friend wanted to reach out and either call or send a personal thank you to this Tim—but they never got his last name.

Many emails and a Yammer post later, the TDS good Samaritan was identified at Tim Ritschard, direct sales representative. Tim witnessed the accident while he was in his car waiting at the intersection right near the trail.

“This group of guys riding were all probably 65 and older,” says Tim. “The guy who fell was hanging a left, but his friend went straight. He went down hard so I called 911 and stayed until the fire department came.”

Mark says that he was very worried his friend had sustained a head injury, in addition to broken bones, so Tim’s calm and helpful support meant the world to them at a very stressful time.

Tim rather shrugged it off when asked about the whole thing saying simply, with a verbal shrug, “You help out when you can help out.” He was in fact, so nonchalant about it, his boss didn’t even know. When she was told, she said the following, which speaks volumes about him:

“This makes my day!!! Tim honestly would never tell me, so I am so glad that you shared. He is so kind and so humble and on top of that, very energetic and amazing at his job! He is the first to cheer on his teammates. This story does not surprise me at all but is still so lovely to hear!”

Thanks, Tim—for what you do every day, and for helping out in a time of need.