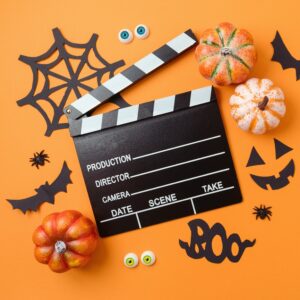 Tis the season when many of us are looking for chills and thrills. From classic scary movies to family friendly favorites, here are some suggestions of what to watch this Halloween.

Halloween (1978)
On a cold Halloween night in 1963, six-year-old Michael Myers brutally murdered his 17-year-old sister, Judith. He was sentenced and locked away for 15 years. But on Oct. 30, 1978, while being transferred from jail, a 21-year-old Michael Myers steals a car and escapes prison. He returns to his quiet hometown of Haddonfield, Illinois, where he looks for his next victims. (AMC, Shudder)

Carrie (1976)
In this chilling Stephen King’s horror novel, withdrawn teen Carrie White (Sissy Spacek) faces taunting from classmates at school and abuse from her fanatically pious mother at home. When strange occurrences start happening around Carrie, she begins to suspect that she has supernatural powers. Invited to the prom by the empathetic Tommy Ross, Carrie tries to let her guard down, but things eventually take a dark and violent turn. (AMC, Amazon Prime, Fubo)

Nightmare on Elm Street (1984)
A classic slasher film, several Midwestern teenagers fall prey to Freddy Krueger, a disfigured midnight mangler who preys on the teenagers in their dreams — which, in turn, kills them in reality. After investigating the phenomenon, Nancy begins to suspect that a dark secret kept by her and her friends’ parents may be the key to unraveling the mystery, but can Nancy and her boyfriend Glen (Johnny Depp) solve the puzzle before it’s too late? (HBO Max, Peacock)

Poltergeist (1982)
All about a house possessed by angry spirits and how the suburban family deals with the ghosts. The whole film is as much about childhood as it is about the supernatural. (HBO Max, Amazon, Google Play)

A Quiet Place (2018)
Even the slightest sound in this thriller can spell your imminent death. A family is forced to live in silence while hiding from monsters with ultra-sensitive hearing A tale of how we can never really keep our children safe. (FX October 17; FX Movie October 23, FXX October 24, 25)

His House (2020)
In the running for number one scariest movie on Netflix, this film follows a couple that flees South Sudan for asylum in England, only to learn that they may have brought a presence with them. It asks whether it’s possible for people, not houses, to be haunted. (Netflix)

Population 436 (2006)
The town of Rockwell Falls has had the same number of residents — 436 — for the last 100 years. A census taker is sent to find out why, and is horrified by what she discovers. (Amazon Video, Vudu, iTunes, Google Play)

We did a scary movie bracket elimination here at TDS and our associates had many ideas about which one is the best. Check it out.

Dear Dracula (2012)
This movie is about a boy’s friendship with Count Dracula. This cute, not scary film, is for kids of all ages. (Available on Amazon to rent or buy)

Hocus Pocus (1993)
This movie is for older elementary school/middle school aged children. A curious youngster moves to Salem, where he struggles to fit in before awakening a trio of diabolical witches that were executed in the 17th century. The spirit of the movie is spooky rather than scary. (Note: After you watch the original, if you have Disney+, you can watch the new sequel.) (Freeform, October 17, 22, 23)

Halloween movies 2022: where to find the best thrills and chills (and for all ages)
Streaming Tunes Tuesday: Rob Zombie