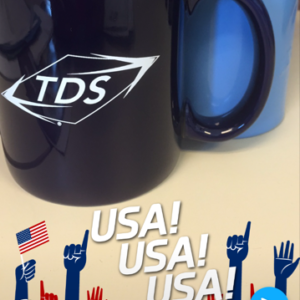 Snapchat brings the bling
The original creator of Stories isn’t resting on its laurels—this week they rolled out location-specific “geo-stickers” and also Olympics filters. The stickers are only in large cities (New York, San Francisco, Washington D.C., Honolulu, London, Sydney, Paris, Sao Paulo, and Riyadh) but the Olympics filters are available for everyone (see above).

$61 million Bitcoin heist
Perhaps the cryptocurrency isn’t quite as secure as everyone thought. A major Bitcoin exchange got hit by thieves who stole a total of $61 million from customer accounts (by bypassing the mandated withdrawal limits). Ouch. They authorities are tracking the coins and it’s possible they could be recovered.

Indegogo of the week: Cronzy
It’s a “select your ink” pen on steroids. It’s a pen that lets you scan colors from real life, and have it turned into ink—almost instantly. The pen’s creators say the pen will let you draw or write more than 16 million colors and the plan is to ship them in spring of 2017. As of this writing, there’s still a handful of $139 Very Early Bird slots left. Maybe it’s just me, but I think this thing looks really cool if it works as advertised!

Get your Windows 10 anniversary gift
Microsoft rolled out a Windows 10 Anniversary Update, “full of new features and innovations.” Coming to new computers first, the update is being rolled out in phases across the world. If you have auto updates set up on your machine, than you don’t have to do a thing. If you have that setting turned off, you can download the update manually at your leisure. Microsoft has instructions if you need some help.

Amazon spills on a BIG secret
And when I say big, I mean literally. After a secret night flight from New York to Seattle, Amazon unveiled its first Amazon Prime jet at the Boeing Seafair Air Show. It is the first of what will be a fleet of 40 planes that Amazon plans to use to haul cargo between their distribution centers. At least one source suspects this move could be in answer to customer complaints with slow delivery times around the holidays with UPS and FedEx.

Apple gets help to squash bugs
Pretty much all of the other big players have had bug bounty programs for a while—an incentive for hackers to report vulnerabilities in operating systems—but not Apple. They have resisted for years…until now. Apple just announced a program to offer cash bounties of up to $200,000 if someone spots a vulnerability in one of their products, but they did put their own unique spin on it: if the bug finder donates their fee to a charitable institution Apple approves of, the company will match the donation.

They dodge, jump your ball, and just plain escape a LOT more than they used to. If you play, this will make you LOL:

Since PokemonGo updated, I updated my GIF… #PokemonGO#pokemon#animation#cinema4d#Nintendo#animationpic.twitter.com/ERbazk4oY7