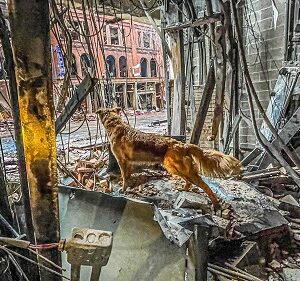 TDS’ own search and rescue heroes

In January, a kind-hearted dog owner shared some highly unique photos of one of his canine companions with his fellow TDS associates. The pictures showed a dog, named Shiloh, who was doing search and rescue (SAR) after the Nashville bombing on Christmas Day.

Shiloh is one of two dogs owned by Chad R., manager of Outside Plant Construction. Radar, named after Radar O’Reilly from the TV show M.A.S.H., is the second. Both dogs bring Chad along when they’re called into action for their SAR work.

When asked how they all got involved, Chad chalks it up to chance. He happened to strike up a friendship with a woman at the Mt. Juliet Police Department where he’s a reserve officer.

“She had a Malinois, so we always talked and I had a fascination with any working dog,” says Chad. “She told me they were search and rescue dogs and invited me to come train with them. The first time Shiloh took to it and I thought it was just another way to give back and help the community. So, I got into search and rescue by chance and the dogs got into it because it’s a path to food or chasing a ball.” 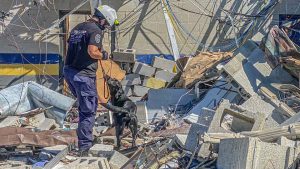 Shiloh, Radar, and Chad have been at it ever since. They’re members of a task force team that gets called up to help in the aftermath of natural disasters and yes, even man-made ones.

“Task force teams can be made up of lots of groups and agencies, so search and rescue from police departments, fire departments, and ambulance services. The K9 team I am on is attached to one of the task force teams of Tennessee,” explains Chad. “The aftermath of the Nashville bombing on Christmas was CRAZY and I have seen hurricanes and tornado damage and nothing compared. It was intense”

Chad says that, for the dogs, it’s a fun game. They know they’ll get a reward of food or a toy when they search and find an object Chad has asked them to locate, but that doesn’t mean it isn’t work. 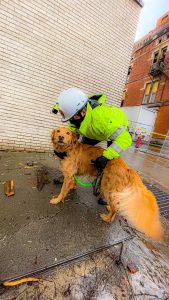 “My lab has a TON of energy but if I take him out and train for 30 minutes because he has to use his mind he will be out for hours. Like when we have a long day at work or in school and your just drained even though you have not done anything physical—it’s the same thing for them.”

Can any dog do search and rescue? Not necessarily. Just like some dogs don’t have the personality to be a canine officer, or be a guide for the blind, not every dog fits a SAR profile. Chad says they have to be like Shiloh or Radar and have a drive for a reward like a ball or food.

“It’s all a game but depending on the dog they do like it because they like to work,” says Chad. “We actually have a washout police dog on the SAR team because she didn’t like to bite, which is good when she finds a dementia patient in the woods.”

Yes, that’s another very common use for SAR teams. Chad says, “Unfortunately, it happens and is probably a bigger use of SAR than disasters across the nation, but I’ve never dug into it. It’s always great to find the person alive and bring them home.”

Although it’s a game for the dogs, for Chad it’s a way he can give back—but he doesn’t feel he should get any special accolades for it. “Dogs are my thing and I enjoy working them and training them,” he says.

Chad’s other side gig

Although he doesn’t want to make a big deal about this, in addition to working search and rescue with Shiloh and Radar, Chad is also a reserve police officer with the Mt. Juliet Police Department. Recently, the department honored many staff members who went above and beyond during 2020, including all staff members who contributed to the 2020 tornado response effort. Chad was honored as Reserve Officer of the Year. 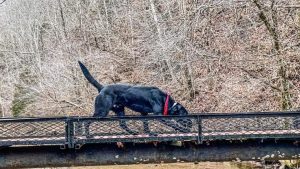