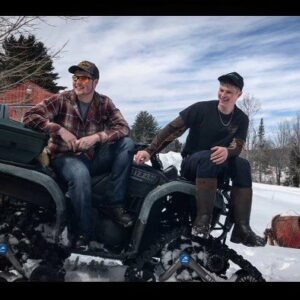 When the nights are cold and the days are warm, three TDS associates know it’s sugaring season.

Large-scale sugar maker Amy Turco, specialist of Field Services Workforce Management, married into the family-run business called Papa John’s Sugar Shack (those are her sons in the photo above). Based in Mt. Holly, Vermont, the couple has grown the business over the past 25 years from 200 taps to about 13,000 taps.

“We have three orchards, with the biggest one having 7,000 taps. We are fortunate in that we are allowed to operate one of the orchards on state-owned land, right near the Okemo Mountain Ski Resort.”

Over the years, the Turcos have grown the business, including several equipment and sugarhouse upgrades. They recently installed a 17,000 holding tank and a high-tech sap, monitoring system.

Depending on where you live and the weather conditions, the sap starts to flow in February and March. Sap flows when daytime temperatures rise above freezing and nighttime temperatures fall below freezing. The rising temperature creates pressure in the tree generating the sap flow. A typical sugaring season lasts four to six weeks.

Starting in January the Turcos begin placing the 13,000 taps in maple trees over 130 acres. At the end of the season, they head back out and remove all the taps so the trees can heal. 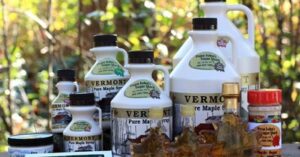 “We love being in the woods and being with family and nature. You have to love it when you’re in the woods seven or eight hours a day,” said Amy.

Amy’s oldest son, Mark Jr., was named a Maple Ambassador and then the following year her youngest son, Austin, received the same honor. “They traveled throughout the state and promoted the industry. They were back-to-back winners, so it was fun to watch them learn and meet so many people.”

Along with maple syrup, the Turcos sell maple-infused syrups, jellies, candies, and maple sugar. Check out their website. They sell to local restaurants, and attend craft shows and fairs in the summer and fall.

Amy works out of the Ludlow, Vermont, office and has been with TDS for 27 years.

Tapping trees in the Midwest 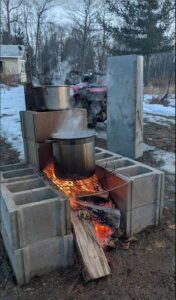 The pandemic has found an influx of backyard hobbyists fueling those maple sugar highs, including Andrew B., associate manager of Senior Customer Repair.

Just one year in, Andrew says he’s now hooked on the hobby and spent the off season researching and purchasing equipment. He says he’s pumped to see what happens this year.

“After spending a full year cooped up in the house, I realized I needed something to do. I was in a local farm store when I saw tapping supplies and it piqued my interest, so I bought some.”

Andrew started with six taps on the property where he lives in Hackensack, Minnesota. “There was a lot of trial and error when I started,” laughed Andrew.

Andrew credits his neighbor, who sugars semi-commercially, for providing much-needed tips. “My first-time boiling sap, I used this big, tall pot. I was outside from 10 in the morning until 2 a.m. and it still wasn’t syrup.” His neighbor explained he needed to incorporate more, but smaller pans, to increase the surface cooking area. He also learned the importance of stoking the fire with smaller pieces of wood.

This year, Andrew plans on tapping 20 trees and has added an “official evaporator” to his sugaring supplies. His wife, Melissa, helps him too, especially with filtering the sap before it’s boiled

“We’ve totally fallen in love with the hobby,” he said. “I love being in the outdoors.”

One evening while boiling sap on the fire, Andrew heard a pack of wolves howling in the distance. “They were maybe a half-mile from our home. It was beautiful to hear.” 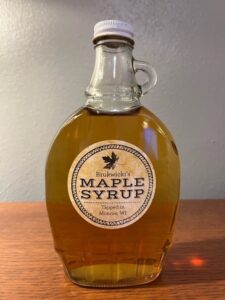 For Michelle Brukwicki, it’s her third season of making maple syrup in Monroe, Wisconsin. Michelle, who takes on her new role as senior vice president of Finance and Chief Financial Officer on Feb. 27, said sugaring is a “hobby” for her family.

“We’re just beginners and we love sharing our syrup and the process of making it with family and friends in our community,” she said. “We live in the woods, so we tap trees on our property and trees of a couple neighbors. We expect about 130 taps this year. Our favorite part about syrup season is being outside as the weather is getting nice and sitting around the fire as the sap boils down to delicious syrup.”

Turning maple sap into pure maple syrup is a centuries-old pastime that requires minimal tools but a lot of patience! Interested in learning the process to make maple syrup? Click here.