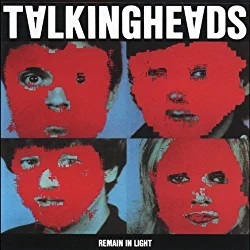 When you look up the “best of” lists for say, an entire decade, you generally expect to read about albums that everyone has been praising for ages—and you don’t expect to find any you haven’t heard before. Today’s featured album is nothing but rave reviews, and yet I realized I can’t say that I’ve heard more than a song or two from the band.

Way back in 1973, David Byrne and Chris Frantz were attending the Rhode Island School of Design. They decided to form a band called the Artistics. Frantz’s girlfriend transported the duo wherever they needed to go, and eventually they all moved to New York City together and shared a loft. Unable to find a bassist, she took up that role as well, getting inspired after listening to Suzi Quatro records. Although the Artistics sort of fizzled out, the trio stayed intact and rebranded. Now going by the Talking Heads, they played their first gig opening for the Ramones in 1975. According to the aforementioned bassist Tina Weymouth, the name came from TV Guide magazine. That publication explained the term was used by studios to describe a head-and-shoulder shot of a person talking as “all content, no action’—the band figured the term fit their musical style, and it stuck. They earned a shot at a contract with CBS Records but failed to move their needle. Site Records however pursued them quickly after that fiasco, signing the band in 1976.

Their first studio album came out in 1977, with little to no fanfare. Albums two and three started to generate some real buzz and were released in consecutive years after their debut. So not only was the music getting a bit better, Talking Heads were consistently putting out new content for their fans. That’s where my focus comes in today, with their fourth studio release titled Remain In Light which hit shelves in October of 1980.

The recording for Remain In Light took place, oddly, in both the Bahamas and Philadelphia. Expectations were petty high since their third album received positive critical reviews, despite only iffy sales. This was supposed to be the breakthrough record for the band and Byrne struggled with the pressure. He suffered from writer’s block—but adopted a new style to get past it. He began utilizing a stream-of-consciousness lyrical style inspired by very early rap music and academic literature coming from Africa. Meanwhile, Frantz and Weymouth (now a married couple) worked hard to get their own features on the album. Some critics felt the band was merely a vehicle for Byrne’s creativity and vocal, and the couple wanted to prove they had founding roots in the Talking Heads as well.

So, what was the end product? Quite simply, one of the top reviewed albums of the ‘80s.

Rolling Stone felt Remain In Light was a brave and absorbing attempt to locate a common ground between divergent styles within often hostile musical genres. It was music that made you dance AND think, ad infinitum. Terms like “classic” and “innovative” were tossed around frequently, with every single reviewer giving it five stars; 10 of 10; or A+. They took African beats to New York City and turned it into a post-punk record. The impact it had on music is nearly unmatched, inspiring not only future musicians, but ones in that very moment. Suddenly it was cool to be creative and think outside the box. Talking Heads did that. It made other bands not feel afraid to try something new, and that was huge. It’s a modest all-time seller, with a few million sold worldwide—but the legacy is so much more than that. It’s part of the Library of Congress and is maintained as one of the best albums of the decade and possibly in history.

Talking Heads followed this album up with their two best-selling efforts in their discography. They broke up, reunited, but have been retired now for almost two decades. But you can celebrate one of the most recognized bands of the ‘80s today, by giving this one a shot. Even if you’re new to it like I was, I think you’ll enjoy it!

Prime Day 2022: How to get good deals and dodge the scams
Defend against imposter scams