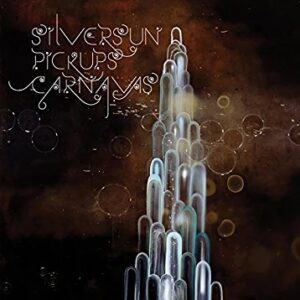 Do you ever listen to music and truly have no idea where you first heard a specific band or song? That’s me relative to today’s featured act. Despite how much music I’ve listened to in my day, I can usually remember where/when I originally heard about a band—but this one is a total mystery to me. I love a few of this group’s tunes and am excited to dive in today and listen to more, even though when they first came across my headphones will forever remain in doubt.

In the early 2000’s, a group of friends were playing in a band together. Nothing super official or popular, but they all felt like they had a sound worth continued exploration. Since they were near Los Angeles, clubs (and influences) were all over the place. They’d play at Silverlake Lounge or Spaceland and started to get such a strong following they put out an EP. Wanting to distinguish themselves from other area groups, they made Silver Lake—a residential/commercial neighborhood in the east-central region of L.A.—their official home. A bit of a weird move to an outsider, but they are now credited with inventing the “Silver Lake” music scene. Their name even originates from a local liquor store there, across from the Lounge. They’d hit the store late nights to buy something to pass around, and called it making a “Silversun Pickup” and the name stuck. The band has since referred to Silversun Pickups as also a state of mind.

Around 2006, the group was signed to Dangerbird Records and looked to finally drop a debut record. In July of that year, Carnavas hit shelves (which is the surname from the Greek side of lead guitarist and vocalist Brian Aubert’s family). Similar to last week’s band, the Pickups dropped the record, and it struggled a bit out of the gate—they needed a single to really catch fire and get listeners to pick up the entire album. In February of 2007, they finally found that track. “Lazy Eye” was released to radio stations all over the country and it took off. It catapulted all the way up to No. 5 on the modern rock chart and entered the top 100 chart as well. The accompanying video was a major staple on MTV (and all the subsidy music networks) and was considered to be one of the top and most-played music videos of the year. The album was a hit in several other countries too, including some unexpected ones like Peru and Ireland—and their U.K. popularity was so big that the Foo Fighters, who are HUGE across the pond, had them as their opener.

Silversun Pickups are an interesting listen for just about anyone no matter what music is in your wheelhouse. They’re rock, sure but they have that artistic feel to them—but don’t put them solely in that box either because some of the riffs on this album are beastly. I don’t like throwing out the “alt rock” label, because so many associate that with the ’90s version—and to be clear, this is not that. But it’s mid 2000’s alt rock, which had a very indie feel to it—like you could listen to this and not lose your street cred, even though it might be a bit softer and certainly less angsty than the rebellious prior decade. Rock and pop were crossing over at that time more than perhaps any other time in music history and the SP’s took full advantage of it. Their distorted guitar work reminds me of some Smashing Pumpkins work to use that a comparison is probably the most apt I can conjure up.

They recorded five more studio albums after their debut, with the newest one scheduled to come out just in a couple weeks. I’m not too familiar with the rest of their work, but this one is definitely worth checking out. I’ve been waiting, I’ve been waiting for this moment all my life—but it’s not quite right. Happy Tuesday!