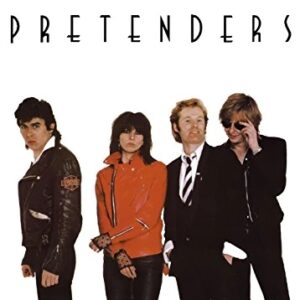 Flipping through the channels on my TDS TV+ the other day, I clicked on MTV Classic and the program ‘Rock Block’. I was expecting to jam out to some heavy guitar riffs, but another band popped up that didn’t seem to quite fit the bill. I realized I truly don’t know anything about them—and it was time to remedy that in this week’s STT!

Chrissie Hynde was from Akron, Ohio but moved to London in 1973. She worked for the weekly music paper NME and at a clothing store. While she was involved in early versions of the Sex Pistols, as well as the Clash and the Damned, she didn’t really become a true figure on those groups. Hynde began putting together her own demos which ended up being heard by Dave Hill at Anchor Records. In 1978 a band called the Pretenders was formed around her style and vocal. Hynde explained the band’s name came from the Platters song “The Great Pretender” which was a favorite of hers and one of her former boyfriends. Ringer musicians were brought in to get a feel for how her songs would translate to a record. That prospect went so well the group was assigned to new label Real Records and full-time musicians were installed as her backups. They started out humbly—touring locally, and doing mostly covers. Their first single was a cover of the Kinks, “Stop Your Sobbing”. It gained enough critical attention and radio play that there was real demand to get their first album in the works.

The Pretenders hit studios Wessex and AIR in London in 1979. The process seemed to take forever, and there are actually varied accounts on when the album was finished and subsequently released. Regardless of the details, it took long enough that three singles were released prior to the Self-Titled album which formally hit the shelves December 1979. One of the leaked tracks was “Brass In Pocket” which more or less skyrocketed the album to the forefront of pop culture. It was played everywhere in both the U.K. and in the U.S. The single reached No. 1 overseas and No. 14 on the Billboard Hot 100. Naturally, when the album came out the expectations were pretty high. Concern was short lived, however, as the album hit No. 1 in the U.K. and No. 9 on the Billboard 200. Sales were strong too, totaling nearly five million albums sold to date—mainly in the two aforementioned countries, but also doing well in Dutch countries as well as Australia.

Critically, this might be the best album you’ve never heard anyone talk about. I can’t find a single negative review on it, with the “worst” being a “9/10” score. Rolling Stone has this as the 20th best album of the entire 80’s and VH1 has it the 52nd best album of all time. It’s also widely considered to be one of the best debut albums in music history. What’s all the fuss about? I think mainly how different and unique it was for the times.

Earlier I mentioned being befuddled by their play on ‘Rock Block’, but after listening to this, I get it. It’s a crazy mix of rock, new wave, pop and punk—aggressive punk at that. There is an edge to this album you certainly wouldn’t anticipate if “Brass In Pocket” was the only Pretenders song you were super familiar with. Hynde’s vocal sells tickets, but the guitar riffs and ability to head bang a bit give it the credibility—and likely cemented the five-star ratings.

A couple of the Pretenders passed away over the years, but they’re still out there touring and making music. They put out a new album as recently as 2020, and they still have a passion for the business and pleasing their fan base. The reissue that came out in 2006 has sixteen tracks instead of the original twelve, but whichever version you listen to, I think you’ll walk away impressed. Happy Tuesday!