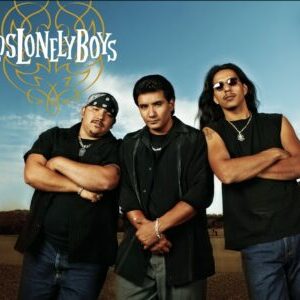 Does getting your music lumped into a specific genre, sound or category help you sell albums? For some bands, it may be of assistance, but for others, it puts them in with bands that don’t do their sound justice. When that happens, what’s the best thing to do? Create your own new genre—that’s what today’s featured act did, and it seems to have served them well.

Three brothers were playing tunes in San Angelo, Texas—200 miles away from Austin, the nearest “big city”—in the mid-90s. A local club owner named John R. Steele hired the brothers to be his house band and, after awhile, they started to attract a following. Mr. Steele was their road manager, and he was able to get them some gigs as far down the road as Nashville, Tennessee. Calling themselves Los Lonely Boys; Henry, Jojo and Ringo Garza (yes, Ringo is the drummer) were belting out rock tunes, with their own little twist. It was a bit Latin inspired, but also a touch of Texas twang to it as well. To use a food analogy, it’s like if you go to your favorite Mexican food restaurant for dinner tonight, and then tomorrow you head to Chili’s for some fajitas. Is it the same food? Nope—but it’s adjacent. It’s why the Tex-Mex was label was created for cuisine. Blending two styles together to create something new. Los Lonely did just the same, creating Tex-Mex (or Texican) rock.

When they struggled to find a label, they self-released a couple of albums in the late ‘90s. Neither of them caught on. They relocated to Nashville after a few gigs but then back to Texas in 2003. The move got them connected with Epic Records and the band finally got a commercially released debut album. Los Lonely Boys hit shelves in March of 2004. It was essentially a re-make of their debut album (but if an album is played but no one is there to hear it, does it exist?)—but this time the release received a warm welcome.

The single “Heaven” was a No. 1 hit on the Billboard charts, and it showed in overall sales. The Los Lonely Boys sits around five million sold to date, with almost all of that coming in the U.S. In fact, that track was so popular, it’s been featured on video games like Guitar Hero and the karaoke version of American Idol. In 2005, Los Lonely Boys won the Grammy Award for ‘Best Pop Performance by a Duo or Group with Vocal’—how they fit that on the award is beyond my comprehension, but an awesome recognition for the trio.

2004 was probably the lowest point in my life for listening to music. I simply didn’t hear and devote as much time to listening as I did before or since—but even a tone deaf me heard “Heaven” and heard it frequently. I can remember thinking how unique it was and wanting to check out more by the group. That day finally came nearly twenty years later and I gotta say, the whole album is pretty strong! Henry and Jojo share vocals in a lot of spots, and the duets are truly unique to an all-male trio band. If you close your eyes and kick your feet up, there are a couple of spots where you’d swear Carlos Santana is providing the riffs, which is probably the ultimate compliment I can toss out for a guitarist. While this has a lot of jam band-type vibes, it has some substance to it as well. Strictly from a mastery of instrumental perspective, this is one of the better albums I’ve listened to in recent memory.

If you enjoy anything from Santana to Stevie Ray Vaughan, this is certainly for you. It’s rock’n’roll with just a touch of telenovela mixed in, and it’s really fun to listen to. If you’ve been locked up too long in this crazy world—give this a whirl today. It might surprise you. Happy Tuesday!

Ultimate Fin Guide to SHARK WEEK 2022!
Escape the summer heat with these 15 movies!