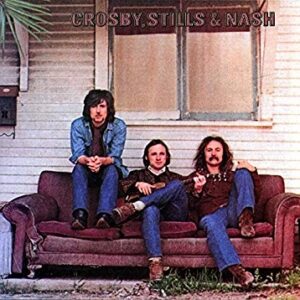 By Austin Krueger on November 8, 2022 in Online Life

Is there a song in your world that is incredibly polarizing? It feels like we all have those in our lives where you know people who love it…and you know people who hate it. For example, when I was in college, I listened to the music channels included in our video subscription (hot tip: you can listen to music on TDS TV+) and ZZ Top was frequently played on the classic rock channel. I didn’t mind it, but my roommate would get so agitated listening to their music, he’d mute it or shut the tv off. Weird, for sure—but some songs or groups have that ability. Today’s featured act and lead single definitely have a similar polarizing feel. Let’s dive in!

Back in the late ‘60s, three guys were playing in various bands. David Crosby played guitar for the Byrds, Stephen Stills played several instruments for Buffalo Springfield, and Graham Nash sang for The Hollies. Somewhat by happenstance, all three were either removed from their respective acts, or the bands themselves disintegrated. One way or another, they all met up and bonded over music and similar interests. In July of 1968 at a dinner party (either at Joni Mitchell or Cass Elliott’s house—recounts vary), they got together and performed a song for the first time. The vocals all harmonized and the three realized they had a very strong chemistry. Nash later said in an interview, “Whatever sound Crosby, Stills, and Nash has was born in thirty seconds. That’s how long it took us to harmonize.” In 1969 they began hustling as a trio to get a record deal, and Atlantic Records quickly came to their rescue.

Sometimes we jump around in an group’s catalog here on STT blog—but not today. We’re listening to their debut album, simply titled Crosby, Stills & Nash which hit shelves in May of 1969. Sales and overall interest started pretty slowly. It took until August before the album started to make any real noise. The first single was released, and the album hit No. 28 on the Billboard 200. It was the second single though, “Suite: Judy Blue Eyes” that truly put the band on the map and got them back up to top 20 status again. Now, if you’re not familiar, it’s a seven plus minute anthem that spans several styles and even a couple languages. It is easily one of the most polarizing tracks I can think of in music history. Some people adore singing along with the “do-do-do do-do’s” and some instantly change the station if they hear it on a road trip. I happen to fall in the former category, so listening to this album today has been a treat.

Beyond that single, it had to have been a pretty good album because it’s sold about sixteen million copies worldwide to date. When it first was released, Rolling Stone noted it was, “an eminently playable record” and “especially satisfying work”. The New York Times was a bit harsher, suggesting it was “too perfect” and that because it was so polished it didn’t resonate as a rock’n’roll album. That criticism isn’t particularly valid in my opinion since, in retrospect, this album doesn’t count as rock—it was folk music, or maybe soft rock if you wanted a broader label. Nothing about what Crosby, Stills & Nash was doing was meant to compete with Hendrix or Zeppelin. This was music to put on and then listen to with your feet kicked up, or sing along to in the car. They had a message, but you didn’t even need to get into that part of it to enjoy the music. These three guys could play and sing as one, and that made them unique and fun.

The trio (eventually foursome, when Neil Young came on board) stopped making music in the ‘70s, but started up again, and called it quits for good in around 2015. David Crosby and Neil Young in particular simply could not coexist, and that ended the reign. None of them ever fully rule out getting back together, but I’ll believe it when I see it. Until then, transport back to the late ‘60s with this one today. Comment with your stance on the song!