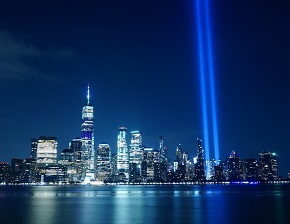 Tomorrow is the 20th anniversary of Sept. 11, 2001. Even though two decades have passed, those old enough to remember that fateful day can still recall where they were and what they were doing. For hundreds of thousands of individuals, the memories are still very real. But that’s the point, isn’t it? We can’t forget and we shouldn’t. To help us #NeverForget, four TDS associates shared their memories of that day and the days following.

As a new field service technician in New Richmond, Indiana, at that time, Ken C. was ready to start Sept. 11, 2001, as he would any other day—driving around to customers’ houses to install and repair their TDS products. Before his first appointment, Ken caught a glimpse of a television airing the first plane crash. Assuming it was just a tragic accident, he headed off to his first appointment. On the way, however, one of the other technicians called him to report that a second plane had crashed into the other tower.

“At the customer’s house, the woman had the TV on, and we just stood there watching together in disbelief,” said Ken. “Eventually, I went under the house to do my work. While I was outside running the cable jack, she gave me updates from the news.”

After finishing the job, Ken went back inside to continue watching with her. He stood with her as the Pentagon was hit and the fourth plane went down in the field.

“We had never met before, but it was like we were in it together,” he said.

Tom M. was supposed to pick his parents up from the airport

Tom M. was born in New York City and grew up in Connecticut. Every Christmas, his family visited NYC to see the lights and Christmas tree at Rockefeller Center. At other times of the year, they visited the Empire State Building, the Chrysler Building, and the twin towers. His school also took field trips to the twin towers multiple times.

“I was at the Quincy, Florida, office when news came over the TV in the breakroom of the first plane hitting the twin towers,” he said. “While everyone was glued to the TV unable to comprehend what they saw, my immediate concern turned to my parents.”

On the morning of Sept. 11, Tom’s parents were set to fly from LaGuardia Airport to Jacksonville, Florida, where he would pick them up after work.

“Not knowing if they had taken off, I was stuck worrying, just waiting for details to know for certain they weren’t on one of the planes that crashed,” he said. “Thankfully, when the first tower was hit, their plane was still on the runway waiting to take off.”

As someone who visited Lower Manhattan frequently as a child, returning to the twin towers site that Christmas was a haunting experience.

The area was filled with photos pinned to the walls, fences, poles, and anywhere else someone could place a picture of their lost loved one.

“Seeing all the destruction was hard to comprehend,” Tom said. “I remember it sounded so different from the typical city noise. There was an eerie silence.”

Heather B. took calls for the 9/11 telethon

Before Heather B. joined TDS in 2010, she worked at a call center for a financial company in Texas. Ten days after the attacks, her company volunteered their call center to participate in the “America: A Tribute to Heroes” telethon, collecting donations for United Way’s Sept. 11 fund. Airing on four major broadcast networks and dozens of other cable and international networks, the telethon raised $150 million for families of the victims in just two hours.

“Even if you weren’t directly affected, it was scary for everyone. It was one of those situations where people just froze because there wasn’t a lot they could do,” she said. “The telethon gave people a way to take action.”

Although Heather and her co-workers took emotional calls from people all over the world, including celebrities, the call that has stuck with her for the last 20 years came from a mother in Canada.

“The mom called because her two kids—I think they were 6 and 8 years old—had combined their piggy banks to contribute to the fund,” she said. “Even though they didn’t have much to give, these young kids knew what was going on in the world, understood the impact it was having, and then wanted to do what they could to help.”

Kit B. acknowledges how a single morning changed lives

“I was home with my 10-month-old son watching ‘Bob the Builder’ when my husband called me to tell me to change the channel to the Today Show,” said Kit B. “I flipped to the channel just in time to watch the second tower and Pentagon get hit.”

Kit went to high school in Westfield, New Jersey, but that day she was living in Madison, Wisconsin, where she worked as a reporter/anchor at WKOW-TV. She knew the next few weeks and months of reporting would be unlike anything she had experienced before. Her job, however, was not the most important thing on her mind—her friends who worked in Manhattan were.

“The husband of my best friend from high school had to walk off the island and couldn’t confirm with his family that he was safe for most of the day,” Kit said. “An old high school friend of mine was working in the south tower that day. Thankfully, he survived.”

Today, Kit recognizes how lives changed that day, whether a person was directly impacted or not.

“Just like when my neighbors called to volunteer to watch my son so I could go into work early, communities came together in amazing ways, and patriotism was at an all-time high,” Kit said. “Sept. 11 had a profound impact on people’s lives. We all lost a sense of security we will never get back. That inspired people to change. I think that is why there is such a strong effort on every anniversary to never forget the lives that were lost that day.”

In 2013, the Tunnel to Towers Foundation launched its traveling museum, the NEVER FORGET Mobile Exhibit. The 83-foot trailer travels across the country to educate people about the tragic 9/11 events and to honor the heroes of that day. Once it reaches a temporary destination, it transforms into a 1,100-square-foot memorial with artifacts, documentary videos, and radio recordings of first responders. New York City firefighters give tours, sharing their firsthand experiences.

Before the end of the year, the mobile exhibit will travel to Ohio, Michigan, Wisconsin, Georgia, Virginia, and Kentucky. Don’t miss it when it passes through your area.