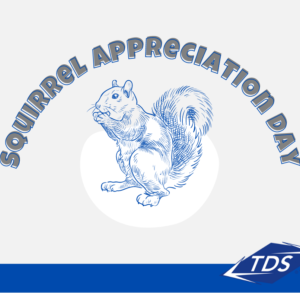 Awh nuts! Did you forget it’s Squirrel Appreciation Day? If so, don’t get too squirrely, because most people fall into that camp.

Squirrel Appreciation Day was started in 2001 by renowned wildlife rehabilitation specialist, Christy Hargrove. The day was created with the goal of encouraging kindness and an accepting attitude toward the bushy-tailed little creatures while trying to come to terms with their many deprecating quirks.

At TDS we have a love-hate relationship with squirrels

One of our Field Services managers says he and his co-workers commonly run into service jobs caused by the loveable rodents. Oftentimes the animals love to scamper across power lines (gnawing on them along the way), make a home where they don’t belong (oftentimes compromising electrical connections), and the list goes on and on.

“I am always getting complaints about squirrel damage,” Lawrence says. “For some reason, they love to chew on the fiber cable. We were working in our Buckhorn exchange lashing up cable due to squirrel damage, and while working, a squirrel came along, walking on the line, and it stopped and looked at us and went on its merry way.” 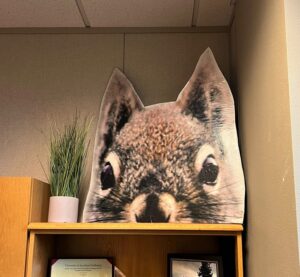 TDS has its own history with squirrel imagery, as well. In the mid-2000s, a loveable squirrel nicknamed Chopper was used in a variety of digital and print ads, with many consumers flocking to show their appreciation for the destructive little guy. While he was purely a modified stock photo (as local animal wranglers said squirrels don’t like posing for photos), local firefighters visited TDS’ Madison headquarters asking about any potential Chopper merch they could adopt for their station. And when you add in the fact that a woman loved him so much, she crocheted squirrel magnets for TDS employees, Chopper’s legacy is cemented in the company’s lore.

“I don’t think we ever had anything like that be so funny,” original Chopper campaign designer Cassandra says. “A lot of people connected with that campaign, and we had fun with it. Squirrels are crazy.” 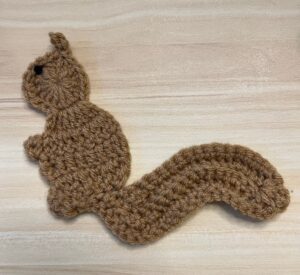 So, even if you’re in the camp who find squirrels to be a bit frustrating at times, take today to appreciate at least this fact: 74% of the nuts squirrels bury are forgotten and end up contributing to natural reforestation efforts. And for that, we salute the downright nutty creatures (at least for a day).