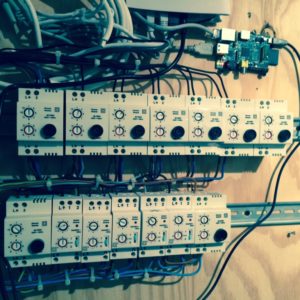 The Internet of Things (IoT) is a bland name for a very exciting concept. It’s a world in which almost anything you can imagine is connected to the global network and can potentially talk to almost anything else. Trees can tell authorities if they are being illegally logged. Pill bottles can remind you if you’re behind on your dosage. Pollution monitors can alert you to hazards. The Center for Data Innovation publishes an excellent Internet of Things guidebook with even more examples.

Technological leaps in battery power, Wi-Fi and cellular radios, and miniaturization all make it possible to cheaply embed a lot of computing power almost anywhere. And Google believes strongly enough in the Internet of Things concept to have paid over $3 billion to acquire Nest, which makes Wi-Fi-ready smart thermostats.

Years ago, people laughed at early IoT concepts, such as appliance makers pitching refrigerators which could re-order eggs when you ran low. At the time it was hard to imagine something so limited saving any time or money. But when multiple devices can all communicate with each other about things that are important to their owner, the giggles fade away and the possibilities look more exciting. A refrigerator that knows what’s going on in your social networking feeds, and automatically orders all of the ingredients you need to complete the recipe you just pinned on Pinterest? That can save you serious time and effort.

We’re already seeing the growth of services which do more than just move data from one gadget to another. Apple’s new iPhone Health app collects fitness and diet data from multiple sources. It doesn’t just build a bland spreadsheet, it provides detailed analysis and guidance. Services and apps that help you make sense of what all of your “Internet things” know will be just as important as the devices themselves in the years to come.

How To Get Ready for the Internet of Things

This is the best part about the Internet of Things: you don’t need to do anything to prepare for it! Well… probably not, anyway.

The addressing system for Internet-connected devices, called IPv4, was devised in the early 1980s, when the Internet was a much smaller place. The global explosion in broadband, wireless phones, and Internet-connected things means that the world is actually running out of Internet addresses. Behind the scenes, device makers and ISPs are gradually converting to IPv6, which dramatically increases the number of available Internet addresses. It is likely in the future that some gadgets will require IPv6 support.

That support typically comes from your wireless router and broadband modem, and many home routers already support IPv6. It’s possible that some people relying on aging Wi-Fi routers may need to upgrade in order to connect all of their devices, but that day is years in the future.

For now, however, all you need to do is pick up the Internet-connected devices that appeal to you.

Unlike computers and smartphones, many IoT devices are “headless.” A device is considered “headless” when it has only a limited display and controls, or lacks them entirely. That usually means that it must communicate with another device or computer in order to perform all its duties.

A Fitbit is an excellent example of a headless device because its small screen only show a few pieces of information, like steps traveled. Inside, however, they are sophisticated computers capable of tracking and reporting much more information. A headless device typically needs to communicate with a computer or smartphone to report its data and be programmed for new tasks. As the Internet of Things grows, you will see headless devices do more communicating directly with other computers and devices, skipping the middleman.

For example, today a Fitbit needs to pair up with your computer or phone in order to report your daily movement. A fully IoT-ready fitness tracker could send that information straight to your Twitter feed, fitness community, or anywhere else you choose.

Everything New is Old

It’s not your imagination if you feel like you’ve heard some of this hype before. Gadgets have been talking to computers, phones, and themselves for quite some time now.

Back in the early 2000s, Bluetooth was introduced and promised us powerful “Personal Area Networks” of gadgets which would help us improve our lives dramatically. Bluetooth became synonymous with wireless headsets, and is still commonly used in wireless computer keyboards and mice, but never really reached its full potential.

In fact, home automation products to toggle lights, change thermostat settings, and even lock doors have been around since the 1970s. But they were quite expensive, and some of the components were tricky to install. And you had to buy costly control boxes for every room, or buy an even more expensive module that let you control the systems from a landline phone.

A home automated with a blend of modern and classic technology, from harmdelaat

Today, just about everyone has a powerful computer, tablet, or smartphone which can act as a master control station for an entire galaxy of “things,” and powerful networks are everywhere. That’s why the Internet of Things is just getting warmed up.

Jason Compton is a Middleton, Wis.-based writer specializing in technology, communication, and entertainment. He has been reporting on the gadgets that make life more productive and fun since the days of the Commodore 64. Follow him on Twitter: @jpcwrites.
View all posts by Jason Compton →