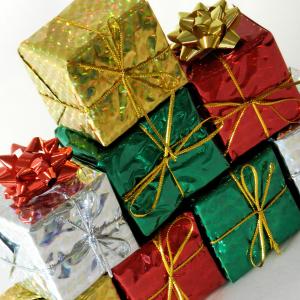 Before Black Friday and Cyber Monday is the mad scramble to assemble the shopping list. At this stage of the game, you may still need gift ideas for a few people. No worries, I’ve got you covered—and not with ideas that’ll break the bank (yes, I’m looking at you, Oprah—$700 Golden Beats headphones? $256 bath scrubs?).

I asked 200 of my friends to share what’s on their wish list (and/or what’s on their kids’). Mixing their ideas with my own, here is a 2014 gift guide for everyone (even non millionaires!):

Raspberry Pi A+
The credit-card sized computer offers tech geeks a chance to build and create. Perfect for someone who likes to tinker with tech, for only $20, a Raspberry Pi A+ might be just the thing. If your budget is a bit larger, pair it with a gift card to Tiger Direct or Newegg.

Loot Crate
You know those monthly box subscriptions? How about a box of Geek and Gamer Gear for your favorite geek? My friend has heard it’s “epically good” and as a geek, I’ve got to say it’s really tempting. Prices start at $20 (including shipping).

Firefly Serenity Flash Drive
It’s a die-cast replica of the Serenity AND it’s a flash drive. Super cute, right? It’s from ThinkGeek, purveyor of all awesome nerdy things. If you know a person who is a fan of popular shows, movies, or games, chances are there’s something here they’d like (if you’re in Madison, Wis. a local source is Geekplastiq).

For the hard to buy for

Zojirushi travel mug and/or carafe
Surely this hard-to-buy for person likes some kind of hot beverage, right? Then they need a Zojirushi carafe or travel mug. My husband, a tea drinker, recently got the 17-ounce carafe for his birthday and I can’t believe how long it keeps things steaming hot. He’s also finding the cap handy as it doubles as a cup. If a flip-top solution is a better fit, go for the travel mug (which my husband also owns and thinks is great).

Boxed sets of TV shows/books
Everyone has a favorite show or book series, but chances are they don’t have all the episodes/stories in a boxed set—those are a lovely and rare luxury. One friend recently received the complete Brady Bunch on DVD, much to her delight, and another has the boxed set of The Office on his list this year. And, don’t forget about the Complete Calvin and Hobbes.

Fiskars PowerGear Loppers
If the person on your list loves yard work, they’ll love it more with Fiskars PowerGear Loppers because they’re so easy to use, cut through anything, and make gardening so much easier. If they hate yard work, they’ll love these loppers for the same reasons. These are my favorite garden tool. Fiskars’ PowerGear tools come in a variety of sizes, so if the loppers are out of budget, check out their other offerings.

Cordless lawn mower
Whether you love or hate yard work, a cordless mower might be just the thing (if you’ve got the budget). It’s quiet, doesn’t require you to run and get gas all the time (my friend’s favorite feature on this kind of mower), and is ready whenever you are.

iPad/iPhone
These came up, as you might expect, more than once. You already know what these are, but Best Buy announced yesterday some good (relatively, of course) pre-Thanksgiving prices on iPad Airs (only $320).
Here’s another, more complete list of the best deals for iPhones, iPads and other Apple products on Black Friday.

Microsoft Surface Tablet
A friend recently got a Microsoft Surface tablet and she’s loving it. She said, “It’s truly a good replacement for a laptop. It has Microsoft desktop functionality (Word, Excel, etc) and is as light and portable as a tablet (has a tablet touchscreen). The graphics are pretty amazing for movies.”

Laptop/Touchscreen laptop
My sister has a laptop on the top of her wish list this season…but she doesn’t know which one. She’s contemplating a touchscreen on, but a techy friend offered her some advice I think might be more helpful than recommending a specific product: “A touchscreen on laptop is only a cool feature if you: a) can’t use a mouse due to a handicap, and b) like to clean fingerprints and smears off your screen regularly.”

Instead, if you’re looking for a laptop that will travel, he suggests looking into the Dell Venue 8 Pro or Surface Pro line. He says, “I have the Dell and it is an 8” tablet running a full version of Windows 8.1. Paired with a Bluetooth keyboard and mouse, it is legitimately a replacement travel laptop that doubles as a tablet when I don’t want to pull out the other stuff. Powerful enough to do most things I need (no serious gaming, of course), but at a fraction of the size and cost.”

Interchangeable jewelry
A number of ladies I know suggested types of changeable jewelry—customizable to the person and to the outfit. One recommendation was for Ginger Snaps Jewelry. This line has about 100 different charms that snap in and out of bracelets, rings, and more. You could do a 3-snap leather bracelet and three charms for less than $40—very reasonable for something custom. Also, my friend told me you can sometimes find these locally at gift shops (if you live in the Madison, Wisconsin area you can get them at Three Orange Doors, for example). I love shopping local when I can!

Also check out Pandora/Trollbeads/Chamilia/Bauble LuLu jewelry These bracelet and charm “systems” can get pricey, but you can always start small. I think they make great gifts for moms especially, as the kids could pick out a new charm for any gift-giving occasion (which makes life easier for dad—see how helpful I am?).

Bebop Parrot Drone
Some women may want this, but only men suggested this appear on this list (note: it could also go under “Pricey gifts”). Parrot’s newest model will set you back $400 and will be available on December 1, but remember, there are lots of other flying toys (and with that word I’ve probably just insulted many) out there. For example, the Hubsan X4 (regular and mini) seem to get good reviews and are $100 or less.

Fitness trackers
Multiple people said they wanted a fitness tracker as a gift. The Garmin Vivosmart and Jawbone were specifically mentioned, but I know many with Fitbits of all kinds who are pleased with those too. Prices start as low as $50, so not too bad, really. Of course, ONLY get one of these for someone if they have expressed in interest in one or are really into fitness :-).

Tickets to a concert
My nieces have all asked for concert tickets as a gift, at one time or another. Whether they wanted to see Justin Bieber or Iggy Azalea, the girls were dying to see their favorite artist in action (heck, this works for adults too!). Taylor Swift is touring soon, so maybe an IOU would work.

iTunes/Google Play gift cards
It might not seem exciting, but the kids in my family always love iTunes gift cards. They can get the music or apps they want…without dipping into their allowance or chore money.

Just Dance 2015
I’m not sure there’s a kid (or grown-up) around who can resist Just Dance. If the teen in your life has a gaming console, chances are they’d play Just Dance. The latest version, just released, has lots of current tunes (including some from Iggy Azalea if concert tickets are too spendy). This game also could make a fun family gift, as the kids always enjoy watching their parents make fools out of themselves.

Wireless speaker
Yes, another music item, but I have to say that my 13 year old loves her wireless speaker. She uses it as her radio, of a sort, to listen to IHeartRadio and her own playlists from her phone. It’s small enough for her to toss in a not-teeny purse and bring with her wherever she goes.

Minecraft
If you need a gift for a child between the ages of 9-14 something Minecraft might be just the ticket. Rather than the standard Toys R Us items, consider getting a Minecraft Lego set (there are now eight different sets!), or perhaps a T-shirt, or maybe encourage them to craft their own mini real-life Minecraft items using fusible/Perler beads.

American Girl animals
The American Girl dolls are still super popular and admittedly not super cheap. But, some of the dolls’ animal friends are pretty reasonable. A friend may be buying an American Girl horse for the 7-year-old girl on her list, but there are also dogs, cats, and even a rabbit. American Girl even has pet grooming sets, beds, and more. Horses start at $48, but the smaller pets are about $30 and the care sets about the same.

Frozen (the movie) toys
If you’ve got a little girl on your gift list, Frozen is a safe bet. If you don’t know whether the child you’re buying for already has things like the singing Elsa and Anna dolls (a wished for item, from what I’m hearing) I’d recommend going for dress-up items. A neighbor friend’s girls have the Elsa and Anna tiaras on their lists, for example. Dress-up wear is always used (and takes a beating) so fresh items are always appreciated—even if it’s a duplicate (and really, can you have too many crowns? I think not).

Disney Infinity
My 10-year-old wants Disney Infinity 2.0 (Marvel or Standard) as do some other boys I know. The starter pack costs about $75 for the base the characters sit on, plus three figures. Another option would be to buy more figures to a child’s set so they have more characters to play in the virtual world (about $13 each). New figures include Baymax from Big Hero 6 and the Guardians of the Galaxy figures are also fairly new. If you’re still unsure about which figures to get, why not buy some power discs? When placed under the figures, they give that character special abilities in the game (prices start at $5).

What’s hot on your list(s) this year? Share some inspiration in the comments.

Ann’s Sweet Potato Casserole
This Week A Madea Christmas, Expendables 3 and The Giver debut on Video on Demand