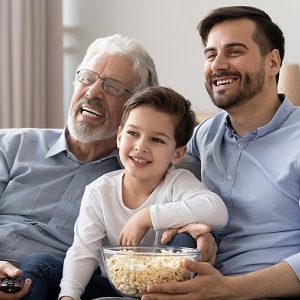 Films to watch with dad on Father’s Day

One of our blog followers was grateful for the idea to watch a movie with their mom on Mother’s Day, so we thought we’d do the same for Father’s Day.

“This is a perfect post for Mother’s Day! I’ve been thinking about where to treat my mother, and your blog just gave me an idea. I guess, we’ll just watch a movie and spend quality time with each other. Thank you for sharing some great movies.” – William

Happy Father’s Day! What film would you recommend watching with your dad?

Single father Chris Gardner (Will Smith) is evicted from his apartment and he and his young son (Jaden Smith) find themselves alone with no place to go. Even though Chris eventually lands a job as an intern at a prestigious brokerage firm, the position pays no money. The pair must live in shelters and endure many hardships, but Chris seeks to create a better life for himself and his son.

Field of Dreams (1989)
Love this film!! A baseball movie where Iowa farmer Ray Kinsella (Kevin Costner) hears voices and decides to build a baseball field in his cornfield. The ghosts of the great players start emerging from the corn to play ball. Ray’s father died when he was a teenager, but they get to play catch in the film.

Indiana Jones and the Last Crusade (1989)

This film features our favorite archaeologist Harrison Ford who sets out to rescue his father Professor Henry Jones (Sean Connery), who vanished while searching for the Holy Grail. The film features some father-son rivalry and some sinister old enemies.

The Lion King (1994)
An animated film that both adults and children adore. Simba idolizes his father, King Mufasa, and takes to heart his own royal destiny on the plains of Africa. But not everyone in the kingdom celebrates the new cub’s arrival. Scar, Mufasa’s brother has plans of his own. The battle for Pride Rock results in Simba’s exile. Simba learns how to grow up and take back what is rightfully his.

Die Hard (1988)
New York City policeman John McClane (Bruce Willis) is visiting his estranged wife (Bonnie Bedelia) and two daughters on Christmas Eve. He joins her at a holiday party where she works, but the festivities are interrupted by a group of terrorists who take over the exclusive high-rise, and everyone in it. McClane realizes that he must save the hostages.

The Godfather (1972)
“Don” Vito Corleone (Marlon Brando) is the head of the Corleone mafia family in New York. The film focuses on the transformation of Michael Corleone (Al Pacino) from a reluctant outsider to a ruthless mafia boss.

Based on a true story, British explorer Col. Percy Fawcett (Charlie Hunnam) journeys into the Amazon, where he discovers evidence of a previously, unknown and advanced civilization. Focused on finding a lost city, Fawcett leaves his family behind to find the city in the jungle. His son later joins him on some dangerous expeditions.

Interstellar (2014)
When the earth is dying, a father will do anything to try to save his children. Matthew McConaughey stars as Cooper, a former pilot who agrees to join a specialized team as they attempt to find another habitable planet. With a genius daughter (played by Jessica Chastain) trying to work out the problem on the ground, Cooper faces unexpected challenges, including dangerous new terrains, a devious team member, and the possibility of never seeing his family again.

To Kill a Mockingbird (1962)
The film is based on Harper Lee’s 1960 Pulitzer Prize-winning novel. The film stars Gregory Peck as Atticus Finch and Mary Badham as Scout, who, along with her brother Jem spend much of their time spying on their reclusive and mysterious neighbor, Boo. Their widowed father and respected lawyer, defends a black man (Tom Robinson) against fabricated rape charges. The trial exposes the children to the evils of racism.