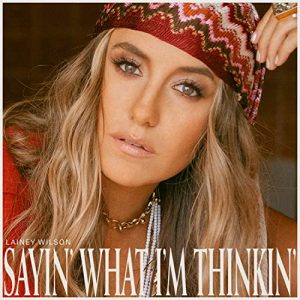 Who doesn’t love a good music recommendation? I know I do. And when a subject matter expert on a specific genre says an artist is a “real up-and-comer”, my interest is piqued.

Lainey Wilson was born in Baskin, Louisiana in May of 1992. Unlike many artists, she wasn’t born into a musical family and didn’t come out of the womb with a guitar over her shoulder. Lainey started to jot songs in a notebook around age 11 and a couple of years later her dad taught her a couple of chords on the guitar. Looking to get a feel for the entertainment business, she impersonated Hannah Montana as a job while in high school, even touring across Louisiana, Arkansas, and Mississippi.

Upon completing her senior year, Wilson moved to Nashville where country dreams begin. She lived in a camper trailer for three years, recording music at a studio that was owned by a family friend. This act of generosity led to Wilson independently releasing her first album in 2016 that against all odds, ended up on the Billboard Top Country Albums chart.

Despite that early success, shortly after that early win, things seemed to grind down to almost a halt for Wilson and her camper. After a few years of toiling away, she eventually released an extended play album that caught the attention of Sony Music—resulting in a new recording deal with BBR Music Group. Wilson started opening for Morgan Wallen on tour in 2019 including at the Grand Ole Opry in February of 2020. Her true commercial debut finally came in February of 2021 titled Sayin’ What I’m Thinkin’.

Two months after release, the lead single “Things A Man Oughta Know” shot up to the top 20 on the Country Airplay and Hot Country Songs charts. Fans and critics alike enjoyed the honest nature of the tune, and the underlying message of simply having good overall character. The music video accompanying the single was filmed partially in Wilson’s own home and is filled with personal elements and close friends of hers. This type of intimate connection is rarely seen in music these days—even in new artists. Musicians seem to have their guard up at all times, and Wilson knocked down all those walls.

In 2021, Wilson has been featured all over the industry, chosen as the next big voice to enter the country music scene. Apple Music, iHeartRadio, and Spotify have all put her on lists referencing their expectations for her to soon be a household name. If you don’t pay too close of attention to how music is consumed these days, those three outfits are about as big as they get. And if that’s not enough, Pandora and Country Music Television hold her in the same regard.

Vocally, Wilson’s so smooth and fun to listen to. She’s got that signature southern accent that makes country music so likeable, and lyrically you can tell she’s been writing since a young age. They are lyrics that you not only sing along with, but you remember an hour after shutting them off.

I know it’s Wednesday, but I was so excited to listen to this one today that even a lack of alliteration in today’s blog title couldn’t prevent me from writing this entry. Overall, I couldn’t agree with the requester’s opinion more—and even if I did, Lainey Wilson has dozens of way smarter publications and firms that would disagree with me anyway. She’s going places, and I’m happy to be a part of it before it turns global. Happy (day after) Tuesday, hope you enjoyed your holiday!