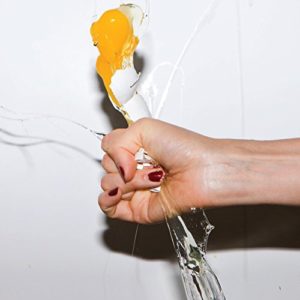 Each week I check out Amazon’s website excited to see which bands and artists have albums for the low, low price of five dollars. Until this week, the decision about who to profile has been unilateral—but that’s about to change. Enter the first-ever request blog. I was asked to feature a specific band, which is awesome!

Karen Orzolek and Brian Chase met as students at Oberlin College in Ohio sometime in the late ‘90s. Karen decided to transfer to NYU where she met Nick Zinner and they made an ‘instant connection’. The two shared a loft with members of the band Metric, which made them get bit by the music bug. Karen and Nick formed an acoustic duo, but Karen more enjoyed the punk rock bands she heard back in Ohio. Needing a drummer, they recruited Karen’s old Oberlin buddy, and the trio was born.

Calling themselves the Yeah Yeah Yeahs, they wrote a variety of songs immediately at their first rehearsal and would tour with well-known acts like The Strokes and The White Stripes. Early commentary noted their “arty” punk style, and a return to a more garage sound. After dropping an EP that caught some buzz, they were signed by Interscope and began working on studio length material.

Today I’m listening to their third studio album It’s Blitz which was released in March of 2009. Originally slated for a mid-April release, the album was leaked on the internet in February, forcing the label to push it up to mitigate the damage. The production notes are a bit interesting. There were two producers and much of the album was recorded in pieces, and combined digitally. Chase would come on, play some different beats; Zinner would jam away on the guitar listening to the beats—then the producers would sew that together. Karen would listen and come up with a vocal melody, and suddenly it would all come into place.

Because of the quirky style, it took several months to record and numerous breaks to come up with the next creative turn. The result was modest sales, but two Grammy Award nominations in 2010. Spin Magazine voted it the second best album of 2009 and NME selected it number three. They both had the single “Zero” as the best track of the year.

What I truly love about this album is the complete diversity in sound. It feels a bit punk, but that’s only because Karen’s vocals are beyond incredible. Her voice has that punk vibe, but it’s very clean, yet raspy. The way it was edited creates almost a synth sound – which really works. I wouldn’t call it alt rock exactly since it has a few poppy elements, but it all comes together nicely. I can’t immediately think anything to compare this record to, in my opinion, it stands on its own—and that’s nothing but a good thing. I’m not much of a dancer, but many people say this is a great album to get up and dance to, I’ll take their word for it, but the funky beats and up-tempo nature, it makes a lot of sense.

Because this album crosses so many genres, if you’re a fan of rock, punk, alt rock, pop or anything electronic, I think you’ll enjoy this. Inefficient production aside, you really do hear the time they took to make each single into something greater than jamming away in the studio, and that’s a nice change of pace in today’s world which lacks production values. Give these guys a chance today for $5 bucks— I think you’ll find yourself tapping your toes and craving more. And, if you ever catch an album you’d like to see in the spotlight, get in touch and it shall  be written! Happy Tuesday!