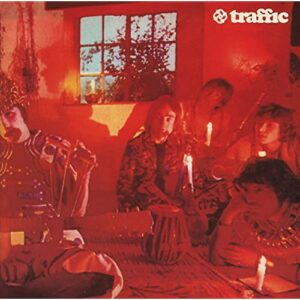 There are so many influential bands by today’s standards that it’s easy to lose track of some over time. Many have been almost forgotten by modern generations, simply because their music doesn’t see much play. Today’s featured act is in the Rock and Roll Hall of Fame and many ‘best of’ lists—but I’m guessing many can’t name a single track.

Singer and Keyboardist Steve Winwood was the lead singer of the Spencer Davis Group. Meanwhile, drummer Jim Capaldi and guitarist Dave Mason were in their own band, and woodwinds player Chris Wood played for a group called Locomotive. The quartet met in the mid-‘60s and started to jam together at The Elbow Room in Aston, Birmingham. When Winwood departed from his band, they decided to start a new group called Traffic. Capaldi came up with the name while the four waiting to cross a street in Dorchester.

They rented out a cottage in Berkshire to start writing and rehearsing their music. It didn’t take long for them to find a record deal—they were signed to Island Records shortly after forming. As it turned out, Winwood’s brother was looking for work after the Spencer Davis breakup as well, and he became a producer and executive there. In 1967, Traffic was leaking out singles and all of them would become successful. They were generating quite a following in England, Canada, and the U.S.

Island wanted to capitalize on that buzz, so Traffic hit the studio to begin recording their debut album. Mr. Fantasy was released in December of 1967. They brought in two Americans to assist with the record, one to produce and one to be the sound engineer. While they charted with their singles in the states, it was viewed to be the country they had the least footing in. One of the main changes they made was to not heavily feature the sitar—an instrument that dominated their first couple singles. They also delayed the U.S version for a month, which coincided with the departure of the group’s backup guitarist. The U.S. version removed him from the cover art, sequenced the tracks differently, and deleted two tracks that member wrote.

Between the changes for the U.S. release and different stereo/mono mixes of the album, there were four very distinct versions on record shelves at the same time in history—something I’m not sure I’ve ever heard of or seen before. It didn’t deter the fans though, as the album reached No. 16 on the U.K. charts and No. 88 on the Billboard 200.

Critically, the album was well received. Most already knew Winwood and his vocal style due to the popularity of his former group. But many felt his voice ‘matured’ when stepping into the Traffic front-man role, adding a new depth and range of style and tones. Many felt he had a style of his own, and it blended perfectly with the group. Winwood has this almost R&B quality and tone to his vocal, and Traffic was this eclectic progressive, experimental rock type group (perhaps with a little psychedelic blended in for good measure). For a comparison, I would say Mr. Fantasy is close to the wide-ranging sound of the Beatle’s Sgt. Pepper’s record.

In modern times, the album saw a bit of a renaissance in 2017 when the title track was used in the Marvel film Guardians of the Galaxy Vol. 2. It was an ‘a-ha’ moment even for me, when the movie opens with the tune and I had a hard time placing. When I got home and Googled the lyrics, it was an “oh yeah—Traffic!!” reaction.

The band broke up for a bit for Winwood to join Eric Clapton to create Blind Faith, but they quickly got back together through the mid-‘70s. A couple of the members also reunited for a year in the ‘90s, but most of what made this band a Hall of Fame-worthy group came in the original lineup. Give it a shot today, they might just play you a tune, one that makes us all happy.

Cheap Tunes Tuesday: The Gufs
Five athleisure brands to check out in 2021