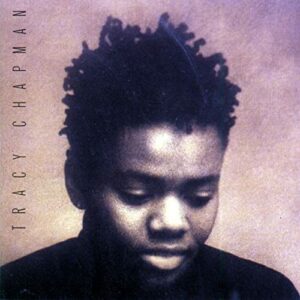 Folk music is often associated with the peace and love of the 1960s hippie movement, but occasionally you hear artists from much later in music history who not only made good folk music but sold a lot of albums. Today’s featured act has a couple singles everyone knows, but probably haven’t listened to in a while.

Tracy Chapman was born in Cleveland, Ohio in March of 1964. Her mom and dad divorced when she was only four years old. Tracy was raised by her mom who, despite having almost no money, bought her a ukulele at three years old because she was just always drawn toward music. She’d bop to music and make anything into an instrument before she ever held a real one. At eight, she learned to play the guitar and shortly after, began writing her own songs. Tracy herself thinks she may have been inspired to play music from the popular television show Hee Haw.

Sadly, Tracy experienced a lot of racism and bullying growing up during desegregation efforts in Cleveland. She recalls racially motivated assaults to both her and friends at a young age. Eventually she was accepted into a school in Connecticut, and then attended college at Tufts University graduating with a degree in Anthropology and African studies.

Tracy made her major on-stage debut in May of 1985 opening for Linda Tillery. By happenstance, a fellow Tufts student heard her play and his father ran SBK Publishing. After she finished school, he helped Tracy sign a contract with Elektra Records. They got her into the studio fairly quickly, wanting an acoustic album made in only eight weeks. Tracy had a solid song list, mostly comprised of music talking about political and social causes. She flew out to L.A. and recorded her self-titled album which was released in April of 1988.

Backed by the monster single “Fast Car”, the album sold a million copies in only two weeks. It peaked at No. 1 on the Billboard 200 and spawned an additional three singles. Sales to date are over twenty million worldwide. Critically, the album received unanimous acclaim. Rolling Stone felt Tracy “caught everyone’s ear in the hair-metal late Eighties” with the album. And in spite of little or no fanfare, she found a way to outsell some of the biggest acts in music history that year. Many credited Tracy with reviving the singer-songwriter tradition in the U.S.

It’s really easy to listen to this over twenty years later and see why everyone was so positive about it. Even today, it holds up incredibly well. Tracy’s vocal is breathtaking and soulful—she belts out every tune and you know she feels some semblance of emotion with every word uttered. Her writing has a message and makes you feel contemplative.

Most of the tracks are the type of songs you’d hear randomly on a road trip, and before you realize it, two hours have drifted by and you’ve been deep in thought about dozens of different topics. What’s perhaps most intriguing about the record, you’re hearing folk music almost naturally—as the artist sang in the studio. The contemporary production mixed in with her old-school folk aspect was something I’d probably never heard at that point in history. And despite that fact this is the first time I’ve ever listened to the album; I can appreciate how revolutionary it was.

Tracy is one of the most socially active musicians you could ever read about. She’s approached by dozens of charities each year and she says she always does what she can to help. For that reason alone, give this a shot today. Staring from zero, got nothing to lose. Maybe we’ll make something—me, myself, I got nothing to prove. Happy Tuesday!