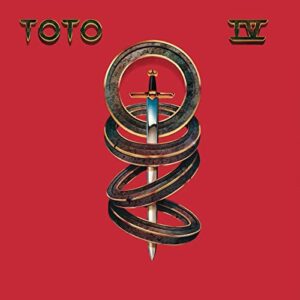 The ebbs and flows of a band’s career can be fascinating. Today’s featured group saw solid popularity thirty years ago but have seen a resurrection of sorts after a more modern band covered their hit single. Additionally, they popped onto my radar after watching the current version of ABC’s “Who Wants To Be A Millionaire?” featured them on a question.

Taking a synthesized trip back to 1977, a bunch of guys were session musicians for bands like Steely Dan, Seals and Crofts, and Sonny and Cher. Keyboardist David Paich and drummer Jeff Porcaro decided to start their own thing and recruited some guys they went to high school with. They found a singer began working on their debut album after signing with Columbia Records.

Paich began composing tracks that would eventually become the band’s first record. At their first recording sessions, he would Porcaro would write the word “Toto” on them to distinguish their work from other groups putting together demos at the same time. In the early ‘80s the band told reporters the name came from Toto the dog in The Wizard of Oz. However it seems the true story is in Latin “in toto” translates to “all-encompassing”—which they felt captured their backstory of being session musicians on so many different acts before branching out. The first record did well, backed my solid single “Hold The Line”, earning them a Grammy for Best New Artist.

Toto struggled with their second and third albums to sustain and real success. Columbia was applying major pressure to deliver another hit or risk being dropped. The guys went back to the formula that saw success on their debut, touching various genres of music. So today I’m focused on their fourth studio album cleverly titled Toto IV that was released in April of 1982.

The lead single “Rosanna” hit major radio the week prior to the album release, peaking at #2 on the Hot 100. Being extremely happy with that alone, the band felt they were already in good shape for solid sales. Things really took off, however, when the third single was called into action six months later. “Africa” became a mega success, topping the charts for their first (and only) No. 1 hit. The album quickly after went platinum in the U.S., and to date, is approaching twenty million copies sold worldwide. It would go on to receive six Grammy nominations (winning five) and would reach the top ten in ten countries around the globe.

What makes this album such a smashing success? I suppose you’d have to transport yourself back to the early ‘80s and understand what was popular at the time. Toto certainly fit in well to their surroundings with their general pop rock sound. There are a couple anthems on the record that you can sing along to, which is clearly evidenced by continued popularity of their singles. When the band Weezer covered “Africa” a couple years ago, it not only saw significant radio play around the world, but it resurrected the original version. As example, the University of Wisconsin began playing the tune during home games at Camp Randall stadium for Wisconsin football. College kids would proudly belt out the lyrics even after the music ended. Not bad for a track that was released 20+ years before they were born.

Toto broke up, got back together and broke up again—all while members came and went. They capitalized on the Weezer cover, making sudden appearances with that band, setting up a tour and even released new material. While they’re back on the shelf for now, you never know what might wake up the sleeping giant again in the future. Until then, give IV a shot. Rosanna, you might just like it! Happy Tuesday!