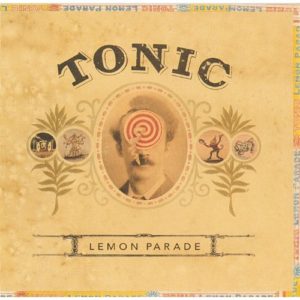 Isn’t it funny when you hear a new band on the radio, maybe they have a top tier, heavy rotation tune and you think, “Boy, THIS band is going to be huge!” Then you fast forward a couple years and all that promise went by the wayside. Today’s band sure seemed like they had it all ahead of them, but it never really panned out that way.

Emerson Hart and Jeff Russo were best friends at a very young age. After their parents each decided to move, once inseparable pals didn’t see each other for a couple decades. One random day, however, the two guys each decided to visit the same pool hall in Los Angeles. Exchanging glances with each other from time to time, they finally recognized each other and the instant bond was back.

Turns out, Hart and Russo were both into music and interested in forming a band. They recruited a bassist and drummer, finding each at different locations in L.A. Wanting to choose the name Radio Flyer for their band, they settled on Tonic upon learning the previous was already taken. They set some sort of record for most gigs in the SoCal area over the course of the next couple years, doing something like 300+ shows. Because of that work ethic, someone was willing to take a chance on them. A deal was struck with A&M Records and Tonic was on their way.

Today I’m listening to that very album—their debut titled Lemon Parade released in July of 1996. The single “Open Up Your Eyes” leaked a month prior to release, causing a great buzz for the record. In a time when music videos were still a thing, they created four promotional videos for MTV. The production was so high-end; they even featured an appearance by Mick Fleetwood.

Sales were quick and demand was solid as the album shot up to #28 on the Billboard 200 and featured two singles that would chart on their own. The second single, “If You Could Only See” was honored as the most played song on rock radio in 1997. In less than one year, the album would be certified platinum in the U.S. and to date has sold over three million copies to date worldwide. Critically the album was generally praised, complementing the band for sticking to their “gig sound” on their first studio production.

While this album came out in likely in the height of my personal music listening time, I never owned it or dug too much into it. I knew the radio tracks and generally enjoyed them, but that was it. A couple years back a friend was requesting music on a long car trip and asked for this band. Getting into it today, it’s nothing too surprising. If you liked the singles twenty years ago, I think you’ll enjoy the album. The distorted guitar seemed to be their quasi-signature sound, and what I think it neat is they manage to work that in even on the ballad tracks, which would normally overtake them. They’re not really going to give you a power rock or hard rock track on this album, and that’s okay. There was plenty of angsty rock music out at the time, and Tonic found their niche.

After a couple album flops and lineup changes, the band took a hiatus from ’04 through ’08. After the regroup, fans funded a Lemon Parade re-release upon its 20th anniversary. The band offered signed copies, free vinyl versions and handwritten lyric sheets for anyone who pledged cash. They are still touring around today and intend on self-releasing more content in the future. Until then, open up your ears and give this one a listen today. For $5 bucks, it’s a quick reminder of how much easier life was in 1996.

What you need to know about Meltdown and Spectre
Madison-area TDS TV customers: KSUN and Kids 4 are coming!