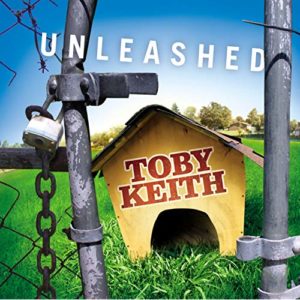 Musical inspiration can come from just about anywhere. On Saturday I attended the American Family Insurance Championship at University Ridge Golf Course here in Madison, Wis. One of the celebrity guests this year was Toby Keith—and I thought,”I don’t know a single song by him.” Let’s change that.

Keith was born in Clinton, Oklahoma in July of 1961. For a period of time as a kid, Keith lived with his Grandmother in the summer in Fort Smith, Arkansas. Grandma owned a supper club where he became interested in the musicians who came there to play. He started doing odd jobs around the club and he eventually got up on the bandstand to play with some bands. Toby received his first guitar at age eight—but seemed to set aside music later in childhood in exchange for football.

After graduating high school, Toby worked as a derrick hand in the oil fields. Working his way up to operation manager at 20, a group of friends decided to start a band, trying to get out of the 9 to 5’s. They’d play local bars and Keith often would leave mid-set to get back to the oil field. In 1982 the oil industry in Oklahoma declined and Keith found himself unemployed. He fell back on football, playing for a farm club for the USFL, but eventually he’d return back to music. In 1984 Keith’s old band Easy Money began hitting the honky-tonk circuit in Oklahoma and Texas.

In the early 90’s, Keith moved to Nashville but despite handing out demos, no one was interested in the band. He returned home depressed. He promised himself if he didn’t get a contract by age 30, he’d quit music. Fortunately, fate intervened. A flight attendant and fan gave a copy of Keith’s demo to a Mercury Records exec and he liked what he heard and signed Keith to a deal. His debut album came out in 1993 and he had a solid career in the decade.

Today, I’m listening to Unleashed, released in August of 2002. It was Keith’s seventh studio album, and would go on to produce four hit singles including one that spent six weeks at the top of the charts. The album itself would also go on to top the Billboard 200, no small feat for a country record. To date, sales are four million in the U.S. alone, making it Keith’s highest-selling album to date. Part of the wide appeal of this record was the hit duet with the iconic Willie Nelson. For many older country music fans, this was their introduction to the Keith and it cemented his status as legend knowing that Nelson was willing to work with him.

The other major element of this album was the lead single “Courtesy” which was a song Keith wrote in response to the 9/11 attacks. He’s long been known as a spirited patriot and very proud to be an American. Many media outlets picked up on this and utilized his services for anything patriotic for the proceeding year or so after this album dropped. The track itself is a bit of a departure from the remainder of the record though—and most of the music here is softer and filled with ballads.

Vocally, you’ll know its Keith right away and that standard rich timber you typically hear in country music is certainly present. His voice would truly prove to be the launching pad for Keith, as he’d turn the music success into so many other ventures. He began acting in television and some films, forming a comedic bond with Stephen Colbert. He’d also opened a couple bars around the U.S. and started his own clothing line. It’s safe to say this album created the Toby Keith fans know today.

I can’t speak too much to his golf prowess, but from a musical icon, he’s right up there. Keith may not be a household name in every city in every town, but he’s pretty close. Give this one a shot today; it might just work for you. Happy Tuesday!

What is the dark web?
FTC: There are no “quick fixes” to clean up your credit