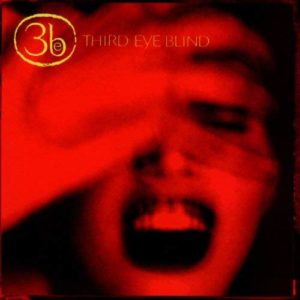 By Austin Krueger on September 4, 2018 in Online Life

Going against the grain is never easy. If everyone for miles in front of you turns left, even if you’re certain you need to go right, it’s hard to make that decision sometimes. Today’s band was maybe the biggest example of a group in the mid-‘90s to not conform to the grunge movement—and did so with incredible success.

Stephan Jenkins and Kevin Cadogan met after attending the same show. They both noted they’d heard each other perform and expressed mutual admiration. The duo began writing songs together and exploring their musical identity. Their first demo came in 1993 with another in 1994. They’d add and subtract a few members, tinkering with their sound.

Without seeing any major success, in early 1996 the band received funds from RCA to record a new demo with a highfalutin engineer. The move worked, as they would get noticed by famed producer Clive Davis who invited them to perform in NYC. Calling themselves Third Eye Blind, the band would always release a large piñata full of candy over their mosh pits. They were booked to open for Oasis in San Francisco (their home base) for a show in April of ’96. They were so loved, the crowd clamored for an encore. The promoter paid them double and spread the word how great the band performed.

Being in a bidding war with various labels, they landed on Elektra Records who offered them the most creative license. Beginning work on their first record right away, the self-titled effort was released in April of 1997. The lead single “Semi-Charmed Life” was released immediately and rose to No. 4 on the Billboard Hot 100. They were all over MTV, national radio and even TV gigs like Saturday Night Live.

The album itself only managed to peak at No. 25 – but sales were solid. To date, a little over 12 million copies have sold worldwide, with half coming in the U.S. In fact, sales were so intense at a point in time, they were able to negotiate opening on U2’s world tour, which is not an easy thing to do.

The critical response was a bit mixed—but mostly because we were just at the beginning of the post-grunge movement and many didn’t know how to view bands like this. After later history would call band like Third Eye Blind “power pop”, the genre and groups all got a bit more respect. It’s hard even two decades later to not recall the immense popularity of the band and this particular album. Between them and Matchbox 20, it was pretty much all you heard on pop radio for a solid two years.

For people like me who were very into the alt-rock movement, this was such a curveball. Maybe at first you were resistant to the more poppy songs with a bit less substance, but it grew on you. And then you listened a bit closer and realized that Jenkins and Cadogan were actually putting their own messages out there. Their shows even at a local coffee shop had an arena rock feel and I think that helped them generate a solid following. They may not have the staying power of Nirvana or Led Zeppelin but the band, and this album in particular, are certainly going to remain on rock radio for a long time to come.

Third Eye Blind had a bit of a nasty breakup in 2000. Jenkins was essentially taking royalties from the other members of the band and Cadogan caught on and sued. It’s a fairly interesting story if you ever care to look it up. While Jenkins is the only original member still with the band, they still tour and even may toss another record out there soon. Until then, give this one a shot today. If you’re suffering from narcolepsy after the extended weekend, this album may just be good for you.

Creative meals to make over the campfire
Watch award-winning shows and movies for just $10.99/mo.