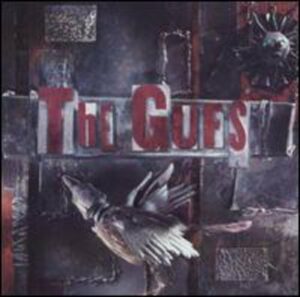 No matter where you’re from, odds are you have a thriving local music scene (or had, pre-pandemic). Some communities have theirs front and center, and others you may have to search around for a little bit. Today’s featured band is from my hometown—Milwaukee, Wisconsin and there’s always something fun about seeing local kids make it big. And the fact their music is good is simply icing on the cake.

Goran Kralj and Scott Schwebel grew up playing soccer. They met while attending the University of Wisconsin – Milwaukee in the late 1980s and playing on the school’s soccer team. They became roommates and got to know each other—and discovered they were both bit by the music bug. Goran had some solid pipes and Scott could wail on the drums. The duo thought they should start a band as a side hobby, so they recruited Goran’s little brother who was still in an Indiana high school at the time. Another friend Tony Luna came aboard to round out the quartet.

The group decided to call themselves The Gufs, which stems from the Demi Moore film The Seventh Sign. The term is a Hebrew word meaning “body” and has to do with the soul at birth in Jewish mysticism. The Gufs began playing gigs at all the local bars—with Luna leaving in 1990 to pursue a career in sound engineering. Morgan Dawley, attending nearby Marquette University, joined the band, which would start to pay dividends.

In 1991, The Gufs entered a battle of the bands contest at Marquette and took second place. With that momentum, the touring became more frequent and feverish. An independent label picked them up and from 1990 to 1995, The Gufs released three albums—to very little sales or fanfare—but with their final indie album, college radio stations nationwide began to play a handful of their songs on regular rotation. Atlantic Records took notice and signed them to a record contract.

In 1996 their self-titled major label debut hit shelves across the United States. Atlantic believed enough in the group they were immediately thrown into major large-scale tours, including opening for bands like Matchbox 20. That move proved fruitful for The Gufs, as the guys became friends with Rob Thomas, even having Rob make cameos on future projects. The album itself spawned two singles and has sold nearly a million copies to date.

Obviously I’m going to be a bit biased, but it was impossible to be a teenager in Milwaukee at the time and not be a fan. Their music was sort of light alt rock, which was very popular in that era. You heard The Gufs constantly on local radio and they did an amazing job of playing the bigger local venues. Summerfest is a nationally known summer concert spanning multiple days, and they’d play the free stages every year, sometimes multiple days. The group would also often meet with fans after the gigs offering free demo tapes to those that hung around. I remember seeing them at a concert hall called The Rave, in which Goran handed me a cassette of “Smile” that was a basement acoustic demo after a show. I felt like a million bucks, and the mellow take on the song became a personal band favorite for me.

While the deal with Atlantic didn’t exactly work out, the group also disbanded in 1999 because of that, becoming disillusioned by the industry. They’d reunite in 2006, and they’re still making music today. I need to familiarize myself with the new stuff, but this one is an absolute classic. Give it a shot today, I tried to live without it for a while, but now all I do is smile. Happy Tuesday!

How (and why) to do a home inventory
Cheap Tunes Tuesday: Traffic