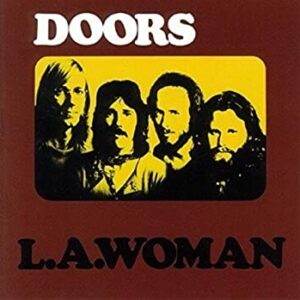 Following up last week’s iconic artist is certainly going to be a challenge because it’s hard to think of acts that have a similar reverence and impact on the business. But lo and behold, I found a group that likely fits the bill. While I’ve covered them once before, it’s always a good idea to revisit some of the classics.

In 2014, we read about and listened to The Doors’ debut album—one of my favorites in music history. It may have been eight years between blog entries, but for me, it certainly would never be that long between listening sessions. After their first release, The Doors seemingly had taken the world by storm. They were making music, touring the world, and dominating all aspects of the industry. In 1967 there was a now infamous incident in New Haven, Connecticut. Jim Morrison and a female fan were kissing backstage and a police officer, unaware of who Morrison was, told them to leave. Jim told the officer to “eat it”. The officer then maced the two, causing a huge delay in the show. When finally recovered enough to perform, Morrison couldn’t let it go. He improvised a profanity laced “song” against the police, which caused law enforcement to surround the stage and the show to be cancelled. The crowd went bananas, already frustrated by the delay and now cancellation. Morrison was arrested and booked for inciting a riot, indecency, and public obscenity. Ultimately, this would only heighten his image as music’s bad boy.

With Morrison battling substance abuse problems, his issues didn’t stop there. In 1969 he showed up, intoxicated, more than an hour late to a show in Miami and basically unable to perform. He tried to get through it, but fans grew tired of the pauses during the performance and substandard efforts. He taunted the crowd in response, ending in another arrest. Meanwhile, The Doors kept making music and touring. Today I’m listening to their final commercial release with Jim, L.A. Woman which hit shelves in April of 1971.

L.A. Woman was the band’s sixth studio album at that point—and each one prior had produced at least one mega single, leading to solid sales. This release would be no different, spawning two commercial hits including one that’s arguably their most noted song in history. “Riders on the Storm” hit No. 9 on the Billboard 200 and stayed on the charts for over 36 weeks. L.A. Woman would end up being a hugely popular album in the U.K. as well, resulting in nearly 20 million albums sold to date, worldwide. It is The Doors’ second-highest selling album, behind their debut.

Critics loved that there was a bit of a change in style compared to other Doors albums. This hit almost exclusively on blues, with a little rock and R&B mixed in. Morrison’s lyrics were perceived to be “less pretentious” from previous works as well. Unfortunately, Morrison was found deceased only three months after the release. Because of that, many revered the album simply because it would be the last of The Doors as we all knew and loved them. A 40th anniversary edition was released eventually, adding some bonus material—but the response was the same. Everyone felt the album had the true staying power seemingly only the rock icons from the ‘60s and ‘70s have. The title track and “Riders on the Storm” continue to be staples on rock radio even in 2022. Add in “Love Her Madly” and you have an album that, even if you released it today, would likely hit the top of the charts.

The Doors tinkered with a couple other vocalists until 1973 and disbanded. They’ve had a couple reunions as well, including one upon being inducted into the Rock and Roll Hall of Fame in 1993. While they were never the same, no one expected them to be. Mister Mojo Risin’ himself was simply irreplaceable, and we can celebrate his legacy today. Give it a listen today because into this house we’re born, into this world we’re thrown.