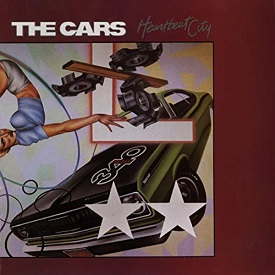 Back in June of last year, I talked about The Cars’ absolutely iconic debut album and their induction into the Rock and Roll Hall of Fame. Sadly, last week lead singer Ric Ocasek passed away in his New York City townhouse where he was recovering from a recent surgery.

In the last post, I talked more specifically about The Cars’ early years, and the phenomenon of their debut. Their second album was more of the same, hitting No. 3 on the Billboard charts. Their third release was considered an experimental album by most, and charted at No. 5, but only had one Top-40 single. Their fourth studio album saw them go back to their standards, but the band decided to take a break after it was finished, with Ocasek and keyboardist Greg Hawkes putting out some solo work.

The band would reunite and release Heartbeat City in March of 1984. Hot straight out of the gate, the first single “You Might Think” sprang to No. 1 on the Mainstream Rock Tracks chart and helped them win Video of the Year at the first ever MTV Video Music Awards. Critically, the album was very well received. The Village Voice said, “the glossy approach the Cars invented has made this the best year for pure pop in damn near twenty, and it’s only fair they should return so confidently to form.”

The album would go on to spawn another five Top 40 singles, with three of them reaching the top 10. The videos for all the singles were also shown repeatedly on MTV, which helped the band reel in an entirely new audience that may not have been as familiar with their earlier work.

From my perspective, this is just another classic record in the Cars discography. It’s a bit behind their debut in overall sales, but is no slouch at over five million copies worldwide. It also has a similar start-to-finish Rolodex of songs that you know from compilation albums. When you have two studio releases where nearly all the tracks are featured on a later Greatest Hits record, you know you did something right.

A couple tracks are certainly a bit more “mid-80’s”, which if you like that overly synthed pop rock sound, will be right up your alley. For the die-hard fans that want classic Cars, you’ve got about seven tracks that are completely interchangeable with their works from the 70’s.

Unquestionably, perhaps the principle reason for the Cars success was Ric Ocasek’s rich vocal. He grew up in Baltimore, but moved to Cleveland at age 16 where his dad took a job with NASA. He briefly attended Bowling Green State University, but dropped out knowing he wanted to pursue music. Ric met Orr in 1965 and they made and sold a lot of really great music together—but became estranged when the band broke up in 1988. Orr passed from cancer in 2000 and Ocasek commemorated their friendship in a song when he passed. Ric’s legacy carries on through is six sons and a solid four decades of great music both with the Cars and in his solo work.

Pay tribute to an outstanding musician and a band that undoubtedly earned their spot in the Hall of Fame and listen to Heartbeat City. Happy Tuesday!