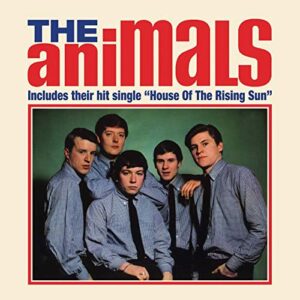 By Austin Krueger on September 28, 2021 in Online Life

Requests to feature groups on this blog are hard to beat for several reasons: first, it means I don’t have to select a band for the week on my own—but more than anything, it almost always gets me to listen to something I haven’t in a while. Today’s featured act is a prime example and a group I’ve never listened to much of beyond a single or two.

Between 1962 and 1963 Eric Burdon joined the Alan Price Rhythm and Blues Combo, which then consisted of five members. The group ended up being dubbed “animals” because of their wild stage presence and the name stuck. Burdon later denied this, saying it was a tribute to a friend nicknamed “Animal”—but ultimately that’s neither here nor there. The newly named Animals moved to London in 1964 in the wake of Beatlemania looking to capitalize on the success of British pop on the U.S. charts. At the time, they were performing fiery versions of staple R&B standards covering the likes of Nina Simone and John Lee Hooker. They would get signed to EMI’s Columbia label and they started to get to work on an actual record.

In June of 1964, the Animals edited and rearranged a classic blues song called “Rising Sun Blues”. The song details a person’s life gone wrong in New Orleans and is a cautionary tale to avoid the same fate. Alan Price was mostly responsible for the drastic changes to the original and dubbed it “House Of The Rising Sun”. The single would be released in the U.S. in August and their debut album The Animals would hit shelves just one month later. While they were considered a rhythm and blues band, the emphasis is most certainly on the blues. From what I can tell, none of the twelve tracks are their own—they’re all covers from some of the best. Ray Charles, Chuck Berry, and Fats Domino are a few names that earned writing credits from the record. For some reason, the album was delayed for release in the U.K., releasing a month later with substantially different contents. Notably, the lead single was left off the British version.

Ninety percent of my experience with the Animals was listening to “House” over and over again when I was younger. The haunting organ riffs and Burdon’s screaming vocal was something I’d just not been exposed to before. Many of the other singles I’ve heard from the group just didn’t match up with that level of intensity. It was like they were dedicated to sticking out as a different band as compared to the rest of the British invasion. The pressure to do exactly that took its toll on the group. Price left in 1965 and Burdon began work on a solo album shortly thereafter.

A new incarnation of the group took hold in 1966 and they’d disband and regroup several times over the next couple decades. None of that halted the legacy though, and the original Animals were inducted into the Rock and Roll Hall of Fame in 1994. “House of the Rising Sun” is still viewed favorably, with Rolling Stone calling it the 123rd best song ever created in 2003. Genesis noted Price’s use of the organ in a rock context and said he was the influence behind what their band did and the success they had.

Burdon, with a group of seven, are still going around touring occasionally as The Animals. While nothing new has come from the band since the late 60’s, they’re still devoted to that classic blues sound, and teaching the next generation what that genre is all about. Give them a shot today and take yourself back to when people had real things to complain about, instead of their Instagram stories not getting enough likes. Happy Tuesday!