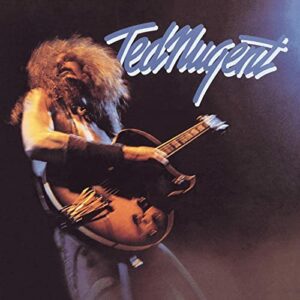 Sometimes when you’re in a funk, you simply need a little rock to get you into a better mood. Today’s featured act is by definition about as rock as possible—and while some people love him and some hate him, if you’re into hard riffs, you’ll enjoy what he has to offer.

Theodore Nugent was born the third of four siblings in December of 1948 in Redford, Michigan but was mostly raised in Detroit. He grew up in a military family, with a dad who was a career army sergeant. As a teen, Ted moved to Illinois where he went to a couple of different high schools. There are some interesting stories about Ted potentially serving in the military. I’ll let you look those up yourself if you’re curious, but essentially, he got a student designation and subsequently didn’t have to serve during the height of the Vietnam War.

Ted started a band called The Amboy Dukes, where he was the nucleus as the lead guitarist and songwriter. The group became a staple at The Cellar, a club outside of Chicago. While the band was deemed ‘okay’ by all standard measures of success—including commercial sales—Ted stuck out with his signature guitar playing style. From 1967 to 1975 the band went through multiple iterations, with Ted finally getting to the point where he wanted something different.

After a trip to Colorado to clear his mind where he hunted and enjoyed the outdoors, he officially dropped the Dukes for good in ’75 and immediately got a deal with Epic Records for a solo career. He hand-picked his guitarist, bassist, and drummer—and decided he’d take the microphone for the first time in his career. The new group immediately hit the road and the studio, looking to get the name out.

Ted’s first solo album aptly titled Ted Nugent was released in September in 1975. The lead single “Stranglehold” was this eight-minute plus guitar attack that everyone assured him would never work for rock radio, nor fans in general. Those experts couldn’t have been more incorrect. That track became a signature for Nugent, not only because of the incredible guitar work, but also because his style was his own—not influenced by others around him. It carried him to No. 28 on the Billboard 200 and led to sales of nearly 10 million copies worldwide to date. Critically, the album was a smashing success with critics loving the unapologetic rock and roll nature of the record.

From a personal perspective, Ted Nugent was an artist introduced to me at a very young age. Years ago, it seemed like any child who took interest in hunting had to listen to his mega-single “Fred Bear”. And that track, even though was recorded twenty years after this particular record, is the exact same style you grew to love and expect from Nugent.

When I got older, I went back and revisited his catalog and even saw him in concert a couple times. Ted had a knack for wailing on the guitar and putting on a show for every single person in the crowd or listening on the radio. You hear a Nugent track and you not only immediately know who it is, but you’ll find yourself putting it on your favorite playlist to hear over and over again. Labeling any artist as rock is tough because it feels like an understatement, but Ted simply is rock—hard rock, arena rock, and somehow even a feeling of southern rock, despite being a northerner. I can’t say it any better than above, if you like rock, you’ll enjoy what Ted was serving up.

After many appearances in many other mediums, Ted is still best known for his music—especially from the ‘70s and early ‘80s. He’s got some opinions that are certainly controversial to say the least, but if you can isolate the music, I have a feeling many will enjoy it. Maybe steer clear of his Dukes days and even his brief dalliance with super group Damn Yankees, solo Ted is the best way to get through your Tuesday. Enjoy!